The developers behind the massive rebuild of Treasure Island in San Francisco cleared another hurdle to starting construction on the 8,000-home development on the man-made island.

A state Appeals Court upheld a lower court’s ruling that an Environmental Impact Report approved by San Francisco is adequate.

A group called Citizens for a Sustainable Treasure Island, led by former San Francisco supervisor Aaron Peskin, sued after city officials approved the EIR and the project in 2011. In December of 2012, a lower court affirmed the EIR and the citizens’ group appealed that decision.

The project, proposed by a partnership between Lennar Corp. and Wilson Meany, aims to add thousands of new housing units along with retail, hotel and office space in addition to renovating historic buildings and creating 300 acres of open space.

“After several years of unnecessary and costly litigation, we can finally begin building more homes for people who want to live in San Francisco,’’ said Chris Meany of Wilson Meany, which is developing Treasure Island with Lennar Corp. “Treasure Island has been one of San Francisco’s most underutilized assets. It’s time to change that.’’

The ruling comes at a time when San Francisco faces a major housing shortage leading to skyrocketing rents and home prices. City officials like John Rahaim, San Francisco’s planning director, see projects like Treasure Island and Park Merced as significant additions to the city’s housing stock. Park Merced is a 7,000-unit-plus project on the western edge of the city and a quarter of Treasure Island’s housing will be affordable.

Nonetheless, both projects have been tied up in lawsuits. Park Merced’s litigation is still ongoing.

“We are ready to begin building a great new community at Treasure Island,’’ said Kofi Bonner, regional vice president for Lennar Corp. “With incredible scenery and easy access by road and water, Treasure Island will become one of the city’s most desirable neighborhoods.’’ 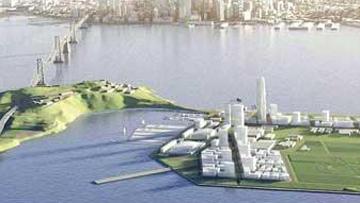