E-commerce giant Amazon is further venturing out of the virtual world and making its mark in the brick-and-mortar retail sector with this month’s debut of its package pickup and return location at the University of California, Berkeley. The company also late last year opened a storefront bookstore adjacent the University of Washington campus in Seattle.

The Berkeley location is the fifth campus site for the online retailer. The move enhances Amazon’s visibility among the college set, who often purchase textbooks and other goods online.

“This program is a way for us to better serve our student customers,” said Ripley MacDonald, director of Amazon student programs, in an e-mail. “By collaborating with the Associated Students of University California (ASUC), we’re able to offer students a customized UC Berkeley shopping experience, with access to millions of items at great prices with faster shipping and convenient access to their packages.”

Amazon’s campus locations provide students with “a convenient and affordable way to get everything they need for university life,” MacDonald said in a statement.

Students also can use the campus pickup location to “return rented textbooks or sell back textbooks they no longer need,” he added.

The 3,500-square-foot staffed Berkeley outlet is located in the Martin Luther King Jr. building in the campus’s Lower Sproul Plaza. The so-called Amazon@ASUC Student Union allows the university’s more than 35,000 students, faculty and staff – and area residents who activate that shipping address from Amazon’s Web site — to use the campus location to pickup and return Amazon orders anytime between 9 a.m. and 9 p.m.

The Berkeley location is the first campus site to offer students the chance to try out Amazon devices such as Kindle e-readers and Fire tablets for activities such as playing video games or listening to music.

Providing consumers a combination of online and brick-and-mortar shopping options can help retailers expand their reach.

“For many years, it was more of an ‘or’ rather than an ‘and’ for brick-and-mortar versus online retailing,” said James Chung, executive managing director, retail, at real estate brokerage Cushman and Wakefield in San Jose. Retailers are starting to understand “they can integrate both,” he said.

“Ultimately, the brick-and-mortar world has always been based on experience,” Chung added. For example, “You can’t really replace the experience of walking through an Apple store and touching and feeling everything.”

“Retailers are seeing they need to have a physical touchpoint in order to engage” the consumer, he said.

“Retailers are more about having as many touchpoints with the consumer as possible,” Chung continued. “Every merchant is different in what they’re offering, but having that omnipresence is growing now.”

Seattle-based Amazon, which launched in 1995 as an online bookseller, opened the 5,500-square-foot Amazon Books in November in Seattle’s University Village outdoor mall at 4601 26th Ave. NE, just north of the University of Washington. The store’s books are selected partly based on Amazon.com customer ratings and most have been rated four stars or above. They are displayed face-out and below each one is a card with the rating and a review. Prices at Amazon Books are the same as prices offered by Amazon.com, according to the company’s Web site. The store also offers consumers a chance to sample Amazon’s electronic devices.

So far, Seattle hosts the only Amazon Books, and MacDonald said he could not speculate on future plans for more storefront locations. 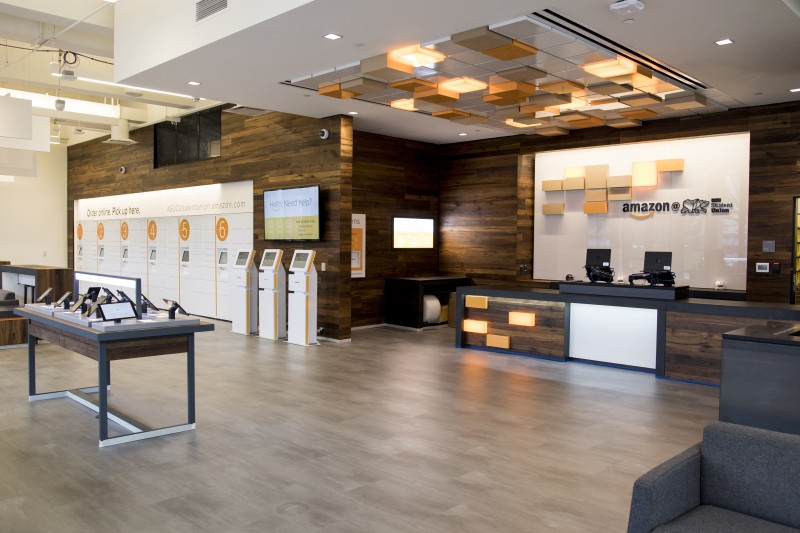