The Santa Clara Valley Transportation Authority launched an experimental on-demand public transportation program in early January in an effort to provide additional resources and ways for its customers to commute and utilize its system. VTA calls FLEX a dynamic transit pilot program that seeks to connect people between regular transit stops centered around high-density employment and retail centers.

As its name implies, FLEX is a technology solution, a phone app, married with a physical system, a fleet of buses that will traverse through the service area, picking up and dropping off customers based on their needs. In a way, it is similar to Uber, but different in such a way that the drop off and pick up stops are actual VTA stops.

Everything, including the payment, will be conducted through the app, which may leave some users scrambling for their Clipper cards or VTA passes.

We sat down with VTA’s Chief Technology Officer, Gary Miskell, as well as Carlene Matchniff, vice president of entitlements & public affairs for Northern California at the Irvine Company, to discuss the program’s launch.

Details about the program can found on VTA’s Website: http://www.vta.org/Getting-Around/VTA-Flex.

TR: Please tell us about the VTA FLEX project. Is the program similar with Emery Go Round in Emeryville and MVgo program in Mountain View?

In both the Emery Go Round and MVgo case, service is only provided to the area of the route and frequency of the schedule. The passenger must get to a station at the required pick up time.

What makes FLEX different?! As passengers request a ride, and the passenger is assigned to a FLEX bus and the bus is routed to where the passenger wants to go and is not dictated by a pre-determined route.

TR: What is the coverage area for the program?

MISKELL: The pilot program covers a three square mile area bordered on the north by Highway 237, on the south by Montague Expressway, on the east by Coyote Creek and on the west by Guadalupe Creek.

TR: How is the program funded? Is there an assessment on participating businesses and/or landlords who want to use it?

MISKELL: The pilot program is funded for now by VTA, using existing vehicles and personnel. Fares are charged per rider.

TR: This is a pilot program, so what will it take to make it permanent?

MISKELL: After a period of 6 to 12 months, VTA will examine various metrics in the program to determine if they’ve met the target goals of increasing public transit use, increased fare box recovery and overall popularity of the service. After which a decision will be made to expand the pilot program to other parts of Santa Clara County and whether or not to make it a permanent, regular service.

TR: Anything else about the program that we should know?

MISKELL: VTA is one of two or three public transportation agencies in the U.S. using this customized software to group similar rides along similar routes on-demand, without a fixed route or fixed schedule. Early rider response to the pilot program has been very positive.

TR: How did how The Irvine Company become involved with FLEX?

MATCHNIFF: We have enjoyed a good relationship with VTA over the years, and when the FLEX program was in the early planning stages we were impressed with how it would serve the needs of our residents. It is a natural fit to work together and be supportive of their efforts to improve transportation. We look forward to this program being successful and expanding in other areas in the Silicon Valley where we have properties.

TR: How will Irvine Company residents be able to access VTA FLEX? 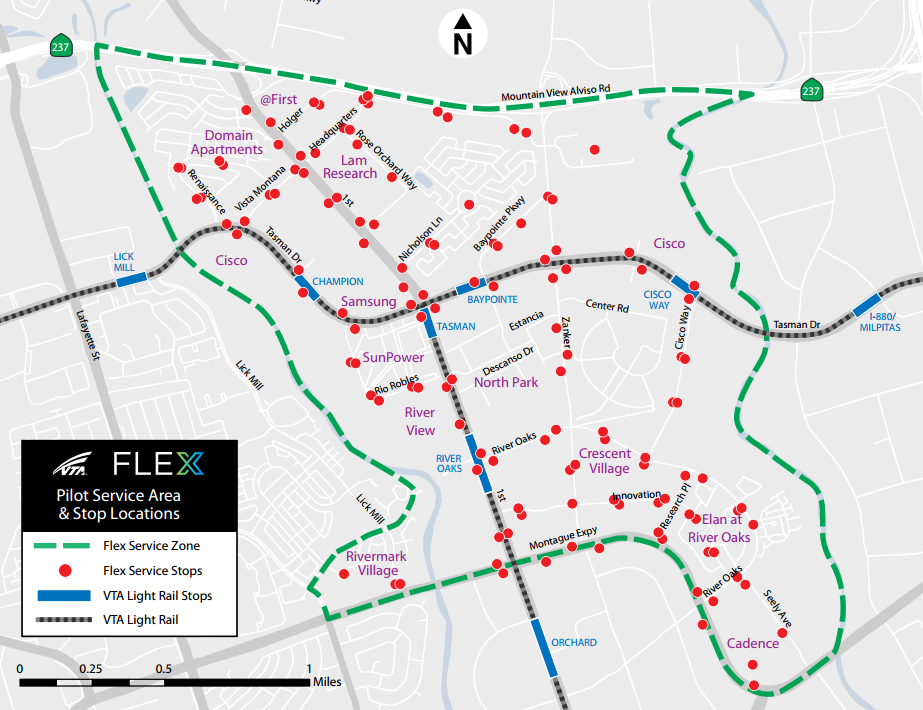