“We’re thrilled to have thousands of your employees in San Jose, hopefully shortening the commute for many,” Mayor Sam Liccardo told Apple executives in the audience. “This has been a long time coming.”

His comments came before the council unanimously approved a development agreement that allows Apple up to 15 years to build a maximum of 4.15 million square feet of space — ranging from industrial to R&D to office — on an 86-acre site in North San Jose. The vote was a foregone conclusion, as the city has been eagerly courting the company for years.

But just what Apple plans to do there is still being ironed out, said Kristina Raspe, senior director of real estate and development for Apple.

“The opportunity to purchase this site came very quickly to Apple,” she said in response to a question from councilman Donald Rocha about the site’s ultimate use. “It was something we jumped on without a firm plan. We’re still studying the site to determine the best use for us. At this point, it looks like it will be office and R&D.”

Those comments were the most Apple has actually said about how the tech giant is approaching the project. And despite the lack of detail, officials called it a game changer for the city, which has been working to attract new corporate tenants for years as a way to shed its bedroom-community status and generate more revenue. On Tuesday, they used the opportunity to signal that San Jose has the welcome mat out for growth, as other Silicon Valley cities clamp down over concerns about traffic and overdevelopment.

If completely built out as office space, 4.15 million square feet could support 16,000 employees — though corporate space utilization depends on many factors, and R&D often uses fewer employees per square foot.

“This is a really exciting day,” Vice Mayor Rose Herrera said. “It’s great news for the city and we’re excited to have Apple have such a great presence. San Jose’s open for business, and we’re going to work really hard to make sure Apple gets what it needs to expand.”

A courtship started in the Apple II era
San Jose has been courting Apple since the eight-bit Apple II era, before the Macintosh revolutionized the personal computer market.

As I wrote back in May, San Jose officials met with co-founders Steve Jobs and Steve Wozniak in the early 1980s about locating downtown. Later, Steve Jobs hatched a plan to build a corporate campus in the north Coyote Valley. Former Mayor Tom McEnery even flew with Jobs on a helicopter to check out the site.

Apple bought the land, but never built anything, and later sold the property to Brandenburg Properties.

Apple ended up staying in Cupertino, growing to dominate that city’s real estate market. In the last five years, as Apple’s market cap and revenue exploded, Apple began growing like a weed into Sunnyvale and Santa Clara.

Finally, last year, Apple began kicking tires on large San Jose sites — including Coleman Highline, a major campus planned near the Mineta San Jose Airport. It ended up not completing a deal there, instead opting to buy land on the other side of the freeway that is part of the current development agreement.

At the meeting, Liccardo referenced the long history and years of wooing, joking that Apple’s government-relations person, Mike Foulkes, “is probably tired of my years and years of me badgering him.”

Foulkes and Raspe were joined by a small contingent of Apple officials and attorneys sitting in the audience of the city’s council chambers. Raspe’s comments largely hewed to her statement given to the city’s planning commission on Jan. 8. Council members expressed their enthusiasm for the company to locate in San Jose, where about 25 percent of Apple employees already live. Tuesday’s action took less than a half hour.

“What can I do to convince you to open a store in Alum Rock?” council member Magdalena Carrasco asked.

What comes next?
As I’ve been documenting, Apple started assembling the site fronting Highway 101 and North First Street last summer, putting it together in a series of blockbuster deals. But it’s still unclear exactly what Apple has in mind for the site. Two projects, totaling about 400,000 square feet, are already in place and Apple says it plans to occupy them quickly.

They include the 296,000 square foot former headquarters of Atmel Corp., which Apple is building out into a lab facility Apple has code-named “Zeus,” and a 200,000-square-foot office building nearing completion. The latter was already under construction by a developer, Steelwave, when Apple leased it last year. (Apple has an option to purchase that property, though it has not yet closed on it.)

But the site includes over 50 acres of vacant land, and the notoriously tight-lipped Apple hasn’t revealed what it intends to do on it. Apple’s real estate moves are closely watched because they could shed light on the company’s business moves and growth expectations. For example, could the site be used to build a long-rumored Apple car?

At the council meeting, Raspe said the company is still planning for the site. Part of the approved development deal involved lowering minimum height requirements along North First Street — something Raspe said was needed for maximum flexibility in site planning.

Still, we might not have to wait long, because Apple doesn’t appear to be simply land banking. Rapse said Apple is looking to move fast, and could have 1,000 employees in North San Jose by the end of the year, when you count another building Apple bought several weeks ago in another pocket — the former Maxim chip fab at 3725 North First Street.

In approving the development agreement, San Jose is not really giving Apple any more development capacity than what already existed in existing entitlements. Essentially, the city is wrapping up all of those approvals into one, and giving Apple 15 years to build it out (though Apple is not obligated to build anything). Companies like having lengthy vested development rights because it provides certainty for the growth plans they can count on. City planners and economic development staff had worked for months with Apple on the agreement, which was first reported by The Business Journal in November.

Technically, San Jose is re-instating and expanding an existing development agreement struck in 2004 between the city and BEA Systems, which had originally entitled the largest parcel Apple acquired last year, but never constructed anything. That strategy allows Apple to use the lower transportation impact fees in place at that time, rather than being subject to a much heftier fee program now in effect. That move is sure to save Apple millions in fees.

San Jose officials say they expect a completed project on the site to contribute millions to the city — up to $15 million a year in annual property tax that would retire debt from the former San Jose Redevelopment Agency. Nanci Klein of the city’s Office of Economic Development also said that Apple is working with the city to participate in a use-tax program that would direct revenue that would otherwise go to other cities, to San Jose. Just how much money Apple ends up contributing to San Jose’s bottom line depends on what it does there. In other cities and counties, Apple’s property taxes provide enormous income: For instance, in Newark, Calif., an Apple data center there is the city’s largest property taxpayer.

But what will Apple end up being for San Jose? What will the company’s arrival add to the city’s mix?

“With Apple and Google and Samsung, we truly are the capital of Silicon Valley,” councilman Manh Nguyen said. “This will open the door for big players to come to San Jose in the future.” 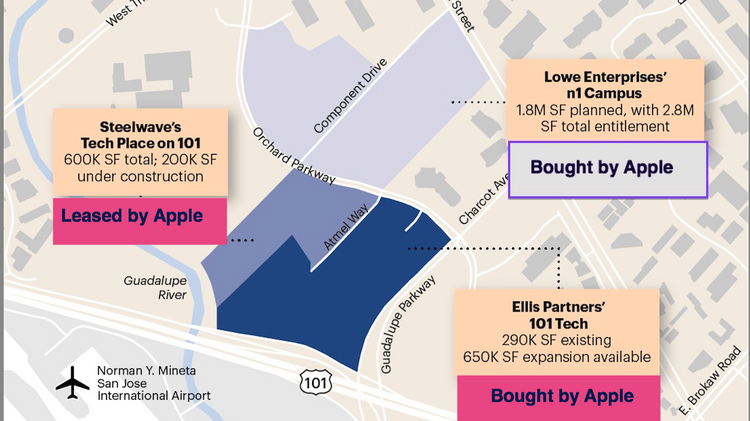