A sprawling ranch in southern Santa Clara County that was once targeted for thousands of new residential rooftops has a new game plan — one based on natural resources, not the housing market.

The new owner of the 6,200-acre property known as Sargent Ranch is now pitching the site as a major sand and gravel quarry, as well as what would be the region’s largest environmental-mitigation land bank. It’s the latest twist in the long-running saga of Sargent Ranch, which the Gilroy Dispatch once described as “a magnet for real estate developers, a Holy Grail to nature conservationists and ‘most sacred grounds’ to a local Native American tribe.”

The change in direction is perhaps understandable considering that previous, more development-intense plans became a lightning rod for controversy. Developer Wayne Pierce had proposed thousands of suburban-style housing units, a golf course, and a casino/gaming resort, but those plans never went anywhere after running into fierce opposition.

New owner steps in
Pierce’s Sargent Ranch LLC ended up filing for bankruptcy several years ago. That created an opening for the Debt Acquisition Company of America (DACA) to swoop in on the site, about four miles south of Gilroy, west of Highway 101.

The San Diego-based distressed debt manager obtained majority control of the land as the previous ownership defaulted. DACA is the majority owner of Sargent Ranch Management Co., the applicant in the latest proposal. (I wrote about DACA taking control of the land back in August of 2013.) The company’s holdings are diverse: It also has major positions in a neurodiagnostic company, a data center company and a proposed community called Tapia Ranch in Santa Clarita.

Just before Christmas, the company filed plans with Santa Clara County seeking approvals for a 317-acre quarry — dubbed “Sargent Quarry” — on a portion of the site. The rest of the property would be used as a mitigation bank, where developers can buy credits that offset the environmental impact of projects elsewhere, representatives said. Existing oil and gas extraction would continue, as would cattle grazing that has long taken place there.

And housing? Not a part of current plans.

“The intent and purpose of the land right now is those four areas, and that’s it,” said Jeanae DuBois, a communications consultant who is working with the applicant, which is going by the name Sargent Ranch Management Co. “That’s all. There are no other plans outside of those.”

Trends drive new business plan
The new concept reflects a number of political and economic realities: Entrenched opposition from environmentalists to housing development in this area; the increasing importance of — and value in — mitigation land banking; and a booming construction industry with a ravenous appetite for sand and gravel, which are key components in concrete, asphalt and other building materials.

Sand and gravel destined for the construction market is California’s top mineral commodity, according to the California Geological Survey, with a value of $911 million in 2013 for 93.9 million tons produced that year. The Sargent Ranch application states that the quarry could contain about 40 million tons of sand and gravel aggregate, enough material to keep the operation humming for 50 years. (Even so, the applicant is requesting a 30-year term for a conditional use permit.)

The San Mateo County, Santa Clara County and Monterey/Santa Cruz region already has a number of sand and gravel mines, some of which are independent operations, with others owned by large general contractors or big building-materials companies. But the region’s demand for this material is so strong that much of the material needed for concrete comes by boat from British Columbia, experts said.

Producing the material closer to where it is used can lower costs, because transportation is so expensive, said John Clinkenbeard, supervising engineering geologist for the California Geological Survey. Sargent Ranch says that the “primary market for products produced in the mine…will be contractors and public agencies in the Santa Clara, San Benito and Monterey County area.”

“It’s bulky, heavy, and low cost, so it doesn’t take very many miles before the cost of transport meets or exceeds the cost of the aggregate,” he said. “If you’re 10 miles closer than the other guy, you have an advantage.”

The mine’s processing facility would be roughly 14 acres in size, the application states. The mine would be done “in an open pit fashion,” and the mined areas would be re-vegetated after the mining is completed in phases.

Banking land for the environment
The property owner is in the early stages of the approval process with the county for the quarry, and is even earlier in the process for the mitigation land bank, DuBois said.

Mitigation banks allow developers to buy credits that are designed to offset the impact of their projects on endangered species elsewhere. For instance, a development in San Jose might destroy habitat of the endangered red-tailed salamander. But a developer could offset that impact by supporting the preservation of salamander habitat at a mitigation land bank.

Santa Clara County in 2013 established the Santa Clara County Habitat Conservation Plan, which set up a system of fees to offset the impact of new development on 18 endangered species, such as burrowing owls, the bay checkerspot butterfly, San Joaquin kit fox and tiger salamander. Under the plan, developers can pay the Santa Clara Valley Habitat Agency, or buy credits from a private land bank owner in the plan’s area. Currently, only one private land bank is in the works, the Lucky Day Ranch Mitigation Bank outside of Gilroy, but it has not yet been approved by state and federal regulators. Land banks must receive approval from a slew of agencies.

“That process takes quite a bit of time,” DuBois said. “We’ve been working on that for quite a while. It’s difficult to find such a large piece that you can actually conserve like this.”

Long road ahead
County officials just finished doing initial review of the quarry application and have submitted their initial comments back to the developer, said Santa Clara County planner Marina Rush. It’s unclear when it could come up for public hearings.

But the applicant is already starting its public outreach. A glossy website for the project states, “Sargent Quarry is in the ideal location with no neighbor impacts, all truck traffic going directly on to Highway 101 and environmental and visual impacts mitigated to less than significant thresholds.” 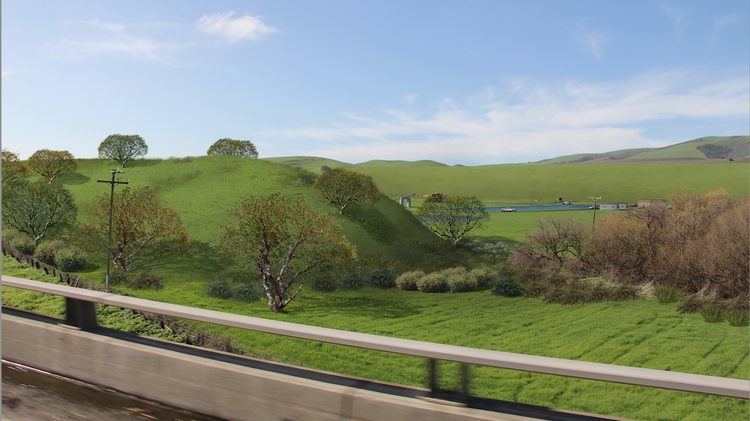