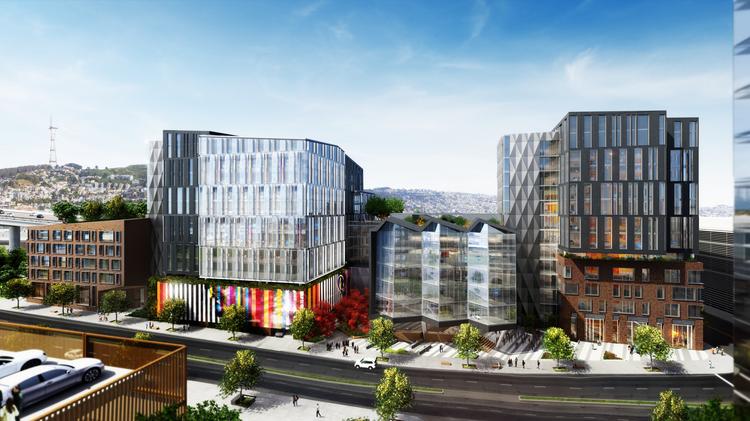 The Bay Area technology boom has made betting men out of many office developers and investors, who aren’t expecting a bad hand anytime soon.

That’s evident by the fact that speculative office development is accelerating, with 27 percent of the 15 million square feet under construction in San Francisco, the East Bay, the Peninsula and Silicon Valley going up without a single tenant pre-leased, according to data compiled by Cushman & Wakefield and CBRE.

Historically, that kind of leap of faith has made developers and lenders sweat. If the economy retrenches and tenant demand dries up, buildings can sit empty, drain capital and become cautionary tales of hubris.

But that fear doesn’t reflect the reality of this point in the economic cycle, saidMike Sanford, Kilroy Realty Corp.’s executive vice president of Northern California.

Kilroy just finished an office building thatstarted on spec at 350 Mission, which leased to Salesforce; it just began construction on Mission Bay’s The Exchange on 16th without a tenant; and it expects to start construction on newly acquired 100 Hooper near Showplace Square without pre-leasing.

“Supply and demand is our first criteria when we decide to build on spec,” Sanford said. “There are 35 tenants that have 50,000 square feet or greater requirements. They’re going to land in new development if they can’t land in existing buildings.”

That kind of demand from growing companies means towers can depend on them to snag space at some point during construction, especially in highly desirable office submarkets. In San Francisco’s South Financial District, companies like WeWork and Trulia grabbed space as 535 Mission almost finished this year. In addition to growing demand, office rents are rising: there was a 16 percent year-over-year increase in Class A rents in the city, according to Savills Studley, a commercial real estate firm.

The decision to build speculatively is easier for a publicly traded real estate investment trust like Kilroy that doesn’t need to rely on an outside investor or lender to take a gamble with equity or a construction loan. Most other developers need major buy-in from investors.

In San Francisco, developers with entitlements and office space allocation under Proposition M can rely on new competition from other office buildings remaining relatively scarce. “It constrains supply, which really helps you if you have an approved project,” said Paul Paradis, senior managing director of developer Hines, which is building Salesforce Tower.

Hines, along with real estate investment trust Boston Properties, started to build the tower in the Transbay district about six months before its Salesforce lease was locked down. It still has about half the building to lease.

Would Hines make the same leap today? “Depends on how long it would take to build that building,” Paradis said. “If you’re late in the cycle, you might have an abundance of data to support good rents and demand, but you might not get your project in time before the cycle ends and you start to go down.”

Both developers have reportedly been in talks with those respective cities to get the rights to build housing instead, a surer bet with potential office rents not allowing for new construction to make financial sense in those areas.

But while San Francisco and Silicon Valley seem relatively safe because of some of the lowest vacancy rates in the country, a few developers in the Bay Area’s secondary office markets are still bullish.

“A truth about our market … is that tech tenants are also very much interested in making real estate decisions short term,” said Chris Meany said last fall. “It’s just the reality that our tenants in this market are moving faster than that. Doesn’t matter if I like that or not. That’s the reality.”

The majority of office developments under construction without an anchor tenant are in San Francisco, followed by the Peninsula and then the East Bay. A few major renovations, such as Latham Square and Uptown Station, will land in Oakland.