Mountain View’s San Antonio Center is about as suburban as it gets: There’s your Walmart, your Kohl’s, your GameStop — and, of course, your ocean of surface parking.

But take a look at a new “master plan” submitted to the city by its new owner, Federal Realty Investment Trust (FRIT). In the drawings, the big-box center is transformed into a network of 10 blocks arranged on a street grid, with a latticework of greenways, linear parks and open space.

But what, exactly, Federal has in mind isn’t clear — the buildings aren’t labeled with residential, retail or office capacities, and Federal declined to talk to me. “At this very preliminary stage, the FRIT master plan does not identify the potential building square footage or land uses,” Randy Tsuda, Mountain View community development director, told me in an email. “We do not know at this time how much development is actually proposed. The master plan is starting with a site plan and building layout.”

That’s actually the point of a master plan, which is a way for the city to provide feedback to the developer on the overall development’s thinking in terms of size and layout before getting into specifics. The city will also be checking to see that the developer’s vision adheres to the city’s new San Antonio Precise Plan, which was implemented late last year and spells out development standards for the 123-acre neighborhood.

Still, the neighborhood’s San Antonio Precise Plan — implemented late last year — provides some hints of the possibilities. The plan allows a building intensity, or floor-area ratio (FAR) of 2.35:1, of which .75 can be commercial. FAR describes the total square feet of the building divided by the square feet of the land. So a little back-of-the-envelope math shows that the site could support up to 3.2 million square feet of development, of which 1 million could be commercial.

In other words, you will probably see residential, office and retail here — but exactly how much of each won’t be known until Federal turns in further development applications, likely next year.

One thing’s for sure: This project won’t happen all at once, and will likely take years to fully build out, thanks to various long-term leases. The master plan shows five phases for the project, with development occurring first on a parcel that fronts El Camino Real, then wraps around the perimeter of the site toward California Street. The massive Walmart site and parking lot would be developed last.

Together, the two projects represent the largest single opportunity sites in the San Antonio area. Another proposal, from Prometheus Real Estate, would plunk 605 apartments at 400 San Antonio, across from Merlone Geier’s project. 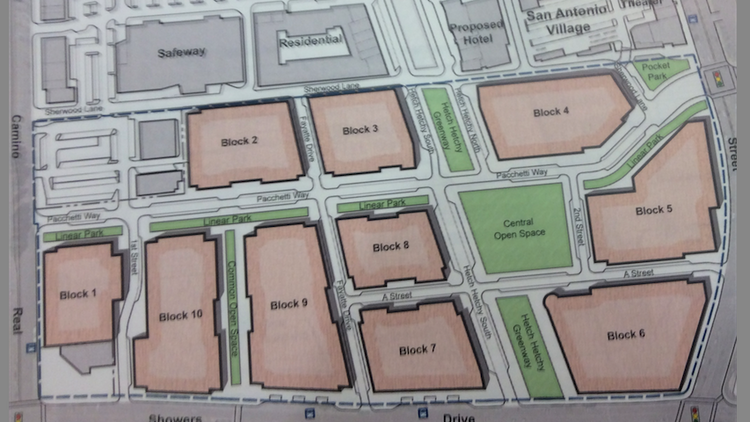