A recently formed real estate investment firm has picked up Mountain View’s Village Lake Apartments in a $145 million off-market deal, and the locally based group is looking for more assets to acquire and develop, executives said.

FortBay LLC, in a joint venture with Colony Capital, acquired the 208-unit community at 777 W. Middlefield Road last week from an affiliate of Braddock & Logan, the project’s longtime owner. The price equates to just under $700,000 per unit.

This is the first acquisition for FortBay, but the firm is not lacking in local experience. Its three principals — Perry Hariri, Lance Tate and Tom deRegt — are Bay Area real estate veterans, with backgrounds in the development, acquisition and operating sides of the business.

“We have experience with office, retail, mixed use, but our core competency is definitely residential,” Tate told me over the phone on Monday. “We also have home-building capabilities.”

The group is focused on “value-add” opportunities in “supply-constrained” markets, Tate said, which means projects that require some renovation to achieve higher rental rates, located in places where housing is tight.

The 1960s-era Village Lake fits that perfectly: Sitting on 9.7 acres, the complex is midway between bustling downtown Mountain View and the city’s North Bayshore jobs district — home to Google, LinkedIn, Microsoft, Intuit and Symantec. Average in-place rents at Village Lake range from $2,700 to $3,200 per unit, a reflection of the tremendous demand for housing in jobs-heavy Mountain View. The garden-style complex is set amid water features and includes a fitness center, billiard room and pool/sauna area.

Another attraction point: The city has approved studying the redevelopment of the project into a more dense community of up to 563 units. Such “gatekeeper” applications — the first step to a formal development proposal — are valuable in Mountain View because the city’s planning department is stretched so thin, most gatekeeper requests are rejected even though building additional housing is a top city priority.

But the new ownership is still assessing what the game plan is for Village Lake.

“Right now, we’re weighing what the possibilities are,” Tate said. “It was attractive that we had an existing gatekeeper. I think we will use that as our guide to see where we go from here.”

In a statement, deRegt called Village Lake “a unique opportunity to invest in one of the nation’s most competitive and sought-after real estate markets.” It also likely won’t be the last deal for FortBay in the region. He said FortBay is “evaluating additional investment opportunities in Mountain View and throughout Northern California, and we expect to announce further acquisitions in the near future.”

This is the second major multifamily sale in Mountain View this month. Earlier in December, Singapore-based Mapletree Group paid $738,000 per unit, or $110 million, for the 149-unit Tera apartments at 881 E. El Camino Real. That dollar figure represents the highest price paid in the city on a per unit basis for a multifamily asset.

The sale prices are being driven by an expectation that employers like Google, Apple, LinkedIn and others will continue to add thousands of new jobs to the area, fueling demand for more rental housing. In Mountain View, the city council is trying to green-light additional multifamily projects, but getting them built is expected to take years. Mountain View’s average asking rents at large complexes had risen 9.6 percent over the last year, as of the third quarter, according to research firm Real Answers.

In the Village Lake deal, Eastdil Secured served as FortBay’s financing adviser in the transaction and sourced senior debt from Acore Capital. 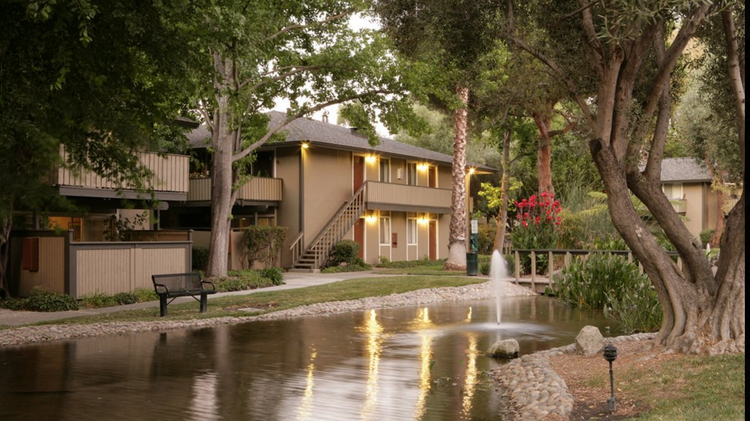