Following a council meeting and public hearing that lasted into the early morning hours, the Cupertino City Council early Wednesday authorized the formal submission of two formal development applications that could bring new hotels and conference spaces to the city, one at Cupertino Village on N. Wolfe Road and the other on the current site of a Good Year Tire store on North De Anza Boulevard. The backers of those projects can now submit formal applications to the city for project and environmental review.

At Tuesday night’s meeting, the council also continued the decision on a third proposal that aims to replace the 40-year-old Oaks Shopping Center on Stevens Creek Boulevard with a retail and residential development that includ es affordable housing. The City Council continued the decision on the Oaks Shopping Center to its regular City Council hearing on August 15, 2017.

The council’s authorization for the formal submission of General Plan Amendment applications for the two hotel-focused proposals came after a public hearing where more than 60 residents, high school students and business owners weighed in about the proposals’ pros and cons.

Some residents expressed concern about the height of the two proposed hotels, which would be higher than most other buildings in the area. Others disliked the apparent loss of on-street parking that would result from the developments.

However, several speakers lauded the idea of having more hotels and affordable housing in Cupertino.

Today’s amendment authorization vote paves the way for the city to consider two developers’ plans, but does not guarantee final approval for either of the hotel-focused proposals.

Here are the three proposals, as outlined at the Cupertino City Council meeting:

The project would be located on 1.29 acres at 10931 North De Anza Boulevard, with Homestead Road to the north and I-280 to the south.

The hotel would be 58 feet high, said Claudio Bono, project applicant and general manager of the Cupertino Hotel. Current city regulations allow a maximum building height limit of 45 feet, according to the General Plan.

The proposal would help keep more visitors needing hotel rooms—and the revenue they bring—in Cupertino. “We do not have enough rooms,” said Bono. “When I see we are displacing so many rooms, and all the revenue is going elsewhere…we do need some additional meeting space and sleeping rooms.”

Cupertino Village Boutique Hotel – Submission Authorized
Under this proposal, two existing commercial buildings measuring nearly 13,430 square feet would be demolished. Going up in its place would be a five story, boutique hotel with 185 rooms, 5,727 square feet of conference space, a rooftop bar and a 2,500-square-foot restaurant.

“Our location is an absolute ideal location for a hotel. We’re right across the street from Apple Park,” said Michael Strahs, director of development for Kimco Realty Corp.

“Market demand is very strong for the high-end hotel market, particularly in the corridor between Palo Alto and San Jose,” said Strahs.

Westport Cupertino – Decision Continued
The applicant, KT Urban, has proposed demolishing the existing 40-year-old, 71,254 square foot Oaks Shopping Center and constructing one of two alternative mixed-use developments in its place. The development site is proposed for 21267 Stevens Creek Boulevard and Highway 85. The Oaks Shopping Center is located across the street from De Anza College.

Both proposals includ e commercial space of approximately 69,500 square feet, a community center of 4,000 square feet, open space, a transit center, underground parking and offsite improvements. In addition, both alternatives includ e a request for a density bonus for the provision of affordable housing.

KT Urban owners and brothers Mark and Ken Tersini purchased the retail center in 2015. KT Urban is known for the development of the Axis condo tower and One South Market apartment high-rise in downtown San Jose.

“We are exploring all options. But we are disappointed and puzzled that the City Council, despite expressing intense interest and many ideas about Westport Cupertino, would not give us the opportunity to take an initial step forward to work with Council and staff on how to create a vibrant Western Gateway to the City,” said Mark Tersini, principal of KT Urban. 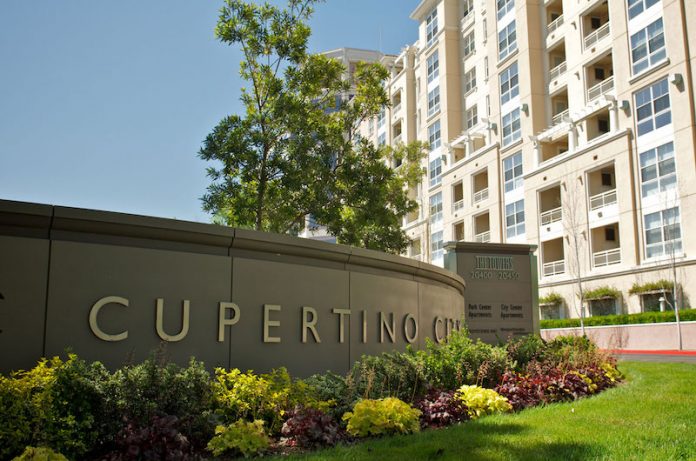