If federal government-owned land is likely exempt from city zoning laws, what are the implications for any development proposed for 30 acres of land in Mountain View that’s located near the NASA Ames Research Center?

It’s a big question, and, for now, city officials will have to wait and see.

On its website, the Army said it is seeking proposals from private, public or not-for-profit entities that are interested in an Enhanced Use Lease (EUL) of the Army-owned land at 230 RT Jones Road. That land tract is the former Orion Park housing area and also comprises a portion of the SGT James Witkowski Armed Forces Reserve Center.

The Request for Proposals says that permitted developments could includ e commercial office and related uses, including education or training facilities. The Army will not consider proposals for any other proposed development, the RFP said.

The lease would be executed from a term of up to 50 years, with one 25-year renewal option.

All federal agencies have what’s known as “sovereign immunity” on federal property, which makes development on their land exempt from local zoning ordinances, said Dennis Drennan, real property manager for the City of Mountain View.

“If they’re building federal facilities on federal land—clearly we understand that,” he said. However, Drennan added, “In our mind, this is a little different. This is a long-term ground lease…to a private developer building a private facility. It’s a question whether we have any land use planning authority or building permit authority.”

Meanwhile, the Department of the Army has given applicants more time to submit their development proposals for 30 acres of land in Mountain View that’s located near the NASA Ames Research Center and Google’s Bay View project. The proposal application deadline, originally July 28, is now set for August 18. The agency released its Request for Proposals (RFP) in early June.

Drennan said the city has expressed its desire in a letter sent to Army last month “to be at the table in the planning of whatever’s going to be put” on the property, but has not yet gotten a response.

“We probably, at this point, aren’t going to get too excited about anything until we find out whether the Army receives what they consider to be an acceptable proposal,” a process that could last beyond the end of the year, Drennan said.

Any group granted the lease will have to deal with the cleanup of groundwater beneath the Army’s property that is contaminated with volatile organic compounds, primarily trichloroethene, a clear, non-flammable liquid with a sweet smell which is commonly used as an industrial solvent, the RFP said.

“All studies performed to date indicate that either or both of these sites are the likely source(s) of the EUL Site’s groundwater contamination,” the RFP said, although “none of the studies identified any source of contamination or release of a hazardous substance, pollutant or contaminant from Army activities on the EUL Site.”

Although groundwater on the property is not being used for potable purposes, “these contaminants are a potential source of vapor intrusion that must be addressed in the design of any future structures constructed on the EUL Site,” the RFP said.

The U.S. Army Corps of Engineers Sacramento District did not respond to a request for comment.

The site was formerly used for military housing constructed by the Navy and later was transferred to the Air Force and continuously utilized to support military housing. The Army accepted oversight for the area in 2000. The housing and support buildings were demolished in 2001 and 2009.

The property is bounded by Stevens Creek to the west, RT Jones Road and the NASA Ames Research Center to the east, the 63rd Regional Support Command Headquarters to the north and the Navy Lodge and Military Entrance Processing Station to the south.

While an appraisal of the property has been completed, government appraisals are not releasable under the Freedom of Information Action Act, the RFP said, adding that the Army “cannot share the fair market value of the property.”

RT Jones Road is the main access to the Army’s 30-acre Mountain View property from Highway 101 and is being expanded to accommodate 4,000 to 6,000 employees in the future, based on a traffic study conducted by Google’s Planetary Ventures unit, which signed a $1.16 billion, 60-year lease with NASA in 2015 for the use of the historic World War II-era Moffett Federal Airfield, which covers 1,000 acres. The airfield includ es Hangars One, Two and Three, an airfield flight operations building, two runways and a private golf course.

Google, now owned by parent firm Alphabet, has said it wants to repurpose the three airship hangars as laboratories where the company can develop cutting-edge technology including robots, rovers, drones and internet-carrying balloons.

Google’s Planetary Ventures would also manage the airfield’s two runways and upgrade an old military golf course for public use.

Google has a ground lease agreement to build an office and research and development park and in June said it was planning to add 300 temporary residential units on the site for its workers. 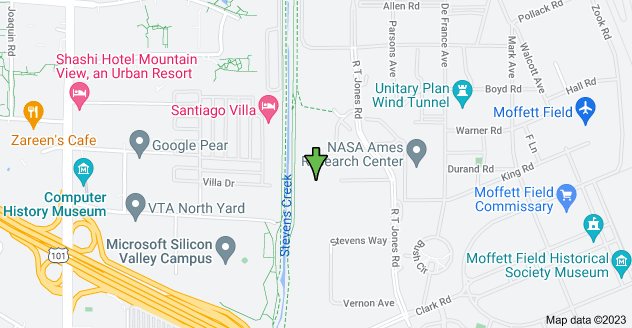