What makes it so great?
The online brokerage has never had a layoff or closed an office and has continued to provide discretionary bonuses and merit increases every year.

Scottrade is a privately owned American discount retail brokerage firm headquartered in Town and Country, Missouri. Its founder, former President and the current CEO is Rodger O. Riney. Scottrade has 505 branch offices around the U.S. It also offers services to Asian-Pacific customers with a service center staffing Chinese-speaking stockbrokers. Scottrade does not offer access to the U.S. market to Australian citizens, which is in the Asian-Pacific region.

Exterior of the Scottrade Center 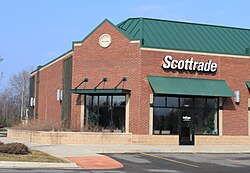 In 1980, Rodger Riney, founder, moved from St. Louis to Scottsdale, Arizona where he and a partner incorporated Scottsdale Securities.[2]

In 1981, Riney returned to St. Louis to open a second branch, but ultimately split apart from his partner in the year 1985 due to conflicting business models. Riney kept the company name, Scottsdale Securities, and lowered the price of commissions to attract more clients. Riney’s approach was successful and by 1991 Scottsdale Securities had a total of 15 branches throughout the US.[2]

By 1998, Scottrade.com commissions were as low as $7 per trade (the same price as of November 2011) increasing their customer base.[2]

In 2000, Scottsdale Securities officially renamed to Scottrade due to the success of their online firm.[2]

In 2006, Scottrade formed a partnership with the St. Louis Blues NHL team, purchasing the naming rights to the 19,150-seat arena in downtown St. Louis. The arena was renamed the Scottrade Center.[3]

During the late-2000s recession Scottrade did not lay off any of its associates. In 2008 alone, Scottrade hired 1,000 new associates and opened 75 new branches despite the economic turmoil.[2]

Scottrade has won numerous awards, most prominently those of J.D. Power and Associates. See awards section below.[2]

In December 2010, Scottrade opened its 500th branch office – located in the West Side of Manhattan.[4]

ScottradeELITE is an advanced trading platform including news columns from both Comtex and Dow Jones, advanced charts, level two and TotalView quotes, and stock screeners.[8]

OptionsFirst, designed by OptionsHouse in 2008, is a platform allowing complex multi-leg options orders, margin accounts with low minimum deposits, and multiple accounts to the same user. All regular common stock and ETF orders are allowed excluding OTCBB and Pink Sheets.[9]

Scottrade Mobile, launched in 2009, is a trading website accessible from any internet-enabled mobile device.[10]

A Scottrade Mobile Application was released for iPhone, iPad, Android, and Blackberry devices on August 2, 2011.[11]

In 2013, Scottrade was ranked No. 53 on Fortune’s annual “100 Best Companies to Work For” List, a drop of 22 from the previous year. This was the firm’s sixth consecutive appearance on the list.[12]

In 2012, Scottrade was ranked No. 31 on Fortune’s annual “100 Best Companies to Work For” List, a drop of 19 from the previous year. This was the firm’s fifth consecutive appearance on the list.[13]

In 2011, the firm was ranked No. 12 on Fortune’s 14th annual “100 Best Companies to Work For” List, a jump of 15 from 2010. This was the firm’s fourth consecutive appearance on the list. “[Scottrade] thrives by going against the grain: Its brokers offer no advice to customers and do not work on commission. Its workplace bucks trends too — no one has ever been laid off, and no office has ever been closed.”[14]

In 2010, the firm was ranked No. 27 on Fortune’s 13th annual “100 Best Companies to Work For” List. This was the firm’s third consecutive appearance on the list. “Almost all managers are promoted from the lower ranks, bucked the recession, laying off no one, hiring more than 1,000 new associates, and opening 58 new branches. Benefits include an onsite fitness center and subsidized gym memberships.”[15]

In 2009, Scottrade placed 60th in Fortune’s Top “100 Best Companies to Work For” List. According to Fortune, the major contributor to making the 2009 list was Scottrade’s ability to shake the turmoil on Wall Street and achieve its 20 year milestone on October 10 of paying quarterly bonuses and never having a layoff. Other factors were a 25% job growth (390 new jobs) and zero employees outside of the U.S.[16]

In 2008–2009, “Scottrade was ranked No. 1 in investor satisfaction with online investing services for the eighth time since 2001, according to J. D. Power and Associates‘ 2008 Online Investor Satisfaction Study.”[17]

In 2008, Fortune announced “that Scottrade, a leading online investment firm, has been ranked 58th on the 11th annual ‘100 Best Companies to Work For’ list.” One of the primary reasons for the ranking, according to the Business Wire article, was job growth. Scottrade hired 46% more people in 2007 than 2006, promoted over 500 employees in 2007, and disclosed that over 20% of Scottrade branch managers “began their Scottrade careers as interns.”[18]

Recently Scottrade was also selected by Computerworld magazine’s 2008 16th best place to work in IT. Many things were considered when rating the work environment for technology professionals such as benefits, diversity, career development, training and retention. In addition to a comprehensive questionnaire regarding company offerings,Computerworld conducted an extensive survey of Scottrade’s IT workers.[19]

Scottrade ranks highest in the industry in J. D. Power and Associates 2013 Investor Satisfaction Survey with an overall score of 810 which is 58 points above the industry average.[23]

In 2008, the Securities and Exchange Commission charged the company with making fraudulent misrepresentations to clients. The company settled the dispute by paying a $950,000 fine.