Top company by employee – 60 – Teach For America – New York US What makes it so great?
Employees at the education nonprofit receive ample paid time off for vacation, as well as for providing care for their family members.

Teach For America (TFA) is an American non-profit organization whose mission is to “eliminate educational inequity by enlisting high-achieving recent college graduates and professionals to teach”[1] for at least two years in low-income communities throughout theUnited States.

The organization was founded by Wendy Kopp based on her 1989 Princeton University undergraduate thesis. Members of the founding team include value investor Whitney Tilson, former U.S. Commissioner of the Internal Revenue Service Douglas Shulman and KIPP President and CEO Richard Barth. Since the charter corps was established in 1990, more than 28,000 corps members have completed their commitment to Teach For America.[2] The first ten years of the organization are chronicled in Kopp’s book “One Day, All Children: The Unlikely Triumph of Teach For America and What I Learned Along the Way” . In January 2011, Wendy Kopp released her second book, “A Chance To Make History“, which outlines what she has learned over the last 20 years working in American education.[3]

In its first year, Teach For America placed 500 teachers. The organization received more than 48,000 applications for its 2012 corps, resulting in 5,800 new corps members in 46 regions. Of these first-year corps members, 38% identify as people of color, including 13% who are African American and 10% who are Hispanic. 23% are the first in their family to earn a college degree. Among colleges and universities, the University of California-Berkeley contributed the greatest number of graduates to the 2012 teaching corps with 88 graduates.[4] 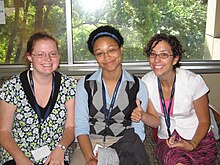 Three Teach For America corps members at the 2008 Houston institute.

Teach For America recruits recent college graduates and professionals to teach for two years in urban and rural communities throughout the United States. The goal of Teach For America is for its corps members to make both a short-term and long-term impact by leading their students to reach their full potential and becoming lifelong leaders for educational equity. Corps members do not have to be certified teachers, although certified teachers may apply.

Unlicensed/uncertified corps members receive alternative certification through coursework taken while completing the program. Corps members attend an intensive five-week summer training program to prepare for their commitment.[5] Teach For America teachers are placed in schools in urban areas such as New York City and Houston, as well as in rural places such as eastern North Carolina and theMississippi Delta. They then serve for two years and are usually placed in schools with other Teach For America corps members.

Teach For America teachers are full-fledged faculty members at their schools, receiving the normal school district salary and benefits as well as a modest AmeriCorps “education voucher” (which can be used to pay for credentialing courses, cover previous student loans or fund further education after the two-year commitment).

As of 2011, Teach For America reported that more than 7,000 of its 24,000 alumni at the time were still teaching and that 64% of its alumni were working or studying in education full-time.[6]

Since the founding of the organization, several independent studies have been conducted to gauge the effectiveness of Teach For America corps members relative to teachers who entered the teaching profession via other channels. Recent teacher pathway studies in three states — Louisiana, North Carolina, and Tennessee — suggest that Teach For America corps members have a greater impact on student achievement than new teachers from more traditional certification programs.[7][8][9] Additionally, Teach For America won the largest grant out of nearly 1,700 applications to the U.S. Department of Education’s Investing in Innovation (i3) grant competition in 2010. The i3 scale-up grants required applicants to provide demonstrated evidence of success through objective, methodologically sound studies (e.g., experimental and quasi-experimental research designs) of student achievement.[10][11]

In a study published by the Urban Institute and the Calder Center in March 2008, and forthcoming in the Journal of Public Policy and Management, the authors found “TFA teachers tend to have a positive effect on high school student test scores relative to non-TFA teachers, including those who are certified in-field. Such effects exceed the impact of additional years of experience and are particularly strong in math and science.”[12]

According to a 2009 USA Today article, Teach For America has been criticized by opponents who claim that the program replaces experienced teachers with brand-new employees who have had only five weeks of training during the summer and are brought in at beginners’ salary levels. John Wilson, executive director of the National Education Association, sent a memo in May 2009 stating that union leaders were “beginning to see school systems lay off teachers and then hire Teach For America college grads due to a contract they signed.” Wilson went on to say that Teach For America brings in “the least-prepared and the least-experienced teachers” into low-income schools and makes them “the teacher of record.”[15]

In the same USA Today article it was reported that in March 2009, Peter Gorman, the superintendent of Charlotte-Mecklenburg, North Carolina schools told board members that because of a commitment made to the program, 100 Teach For America teachers would be retained in spite of the fact that hundreds of other non-Teach For America teachers in the district would be laid off. However, Teach For America spokeswoman Kerci Marcello Stroud says it would be a mistaken notion to say that Teach For America corps members are displacing experienced teachers. “In every region where we send teachers, we’re just one source,” she says. “Once they land, corps members must interview for jobs just like everyone else.”[15]

A 2010 article published by Campus Progress suggested that “TFA’s breakneck training course leaves TFA teachers—or ‘corps members,’ as they’re called—with insufficient classroom experience, before throwing them headfirst into some of the most disadvantaged school districts in the country.”[16]

In a 2009 editorial for the Minneapolis Star-Tribune, Deborah Appleman, a professor of Educational Studies at Carleton College, wrote “Implicit in Teach for America’s approach is the insidious assumption that anyone who knows a subject and is willing to be with kids can teach — with little training.” She also challenged TFA’s “elitist” structure. “The story of TFA becomes a kind of master narrative, a story of heroic and altruistic young people that focuses much more squarely on them than it does on the lives of the children they are committed to serve. There is an elitist overtone to the structure of TFA, a belief that the best and the brightest can make a difference in the lives of children who are less fortunate, even when they are not professionally prepared to do so.”[17]

Notable Teach For America alumni include:

Teach For America has witnessed sustained growth over the course of the past two decades. The chart below reflects this growth by highlighting the changes in various performance indicators.[18][19]

Teach For America has launched special initiatives to help address urgent priorities within the education system.

So far, the ECE program has placed over 1,100 teachers in schools and community organizations across 22 regions. It has also emphasized the importance of cultivating the different social, emotional and physical developments of children by developing several different methods of instruction to accommodate all types of students.[23]

The Math and Science Initiative was developed in 2004 to provide students across the United States, specifically those in low income areas with more math and science teachers. In the 2011-2012 school year, according to the statistics provided by Teach For America, more than 3,200 first and second-year corps members are teaching math and science. This initiative recruits graduating college seniors, graduate students, and professionals with math, science and engineering expertise, and provides Teach For America math and science teachers with training and support.[24]

Launched in 2010, the Native Achievement Initiative was created to directly impact and address the educational inequity that affects Native children in the United States. The goal of this initiative is to expand educational opportunity in schools serving predominantly Native American and Native Hawaiian students by providing 1,500 Teach For America corps members to Native community schools by 2015.[25]

The Eli and Edythe Broad Foundation was the first philanthropic organization to commit to the endowment fund with a pledge of $25 million and called upon other funders to match this figure. Three additional philanthropic donors—the Laura and John Arnold Foundation, the Robertson Foundation, and Steve and Sue Mandel—stepped up and each provided $25 million in matching funds.[26]

Teach for America lists many of their significant contributors on their website, which includes foundations, individuals, corporations, and public and investor categories.