+8%
9,471 $m
Business Services
This year has been one of little change for the Accenture brand. It continues to see success from the global advertising campaign it launched in 2011 after the quick cancellation of its long-running campaign featuring Tiger Woods. This new campaign features success stories and proof points of Accenture’s ability to continuously and seamlessly deliver on its tagline, “High performance. Delivered.” across industries and geographies. The brand continues to explore new ways to deliver high performance to its clients in ways that are meaningful to them, and the integration of digital agency Fjord into Accenture Interactive in early 2013 marks another step toward digital expertise. Accenture further expanded that digital expertise through a recent strategic investment in and expansion of its relationship with Apigee, providers of an enterprise-grade API management platform, forming a global alliance to deliver solutions that help clients more easily build mobile applications and connect enterprise systems. The brand has also demonstrated commitment in its Corporate Citizenship efforts, doubling its 2012 “Skills to Succeed” goal of equipping 250,000 people globally with the skills to get a job or build a business to 500,000 in 2013. Ever delivering against its tagline, the mission of “Skills to Succeed” is to give people around the world the opportunity to deliver high performance in their own right, showing why Accenture remains one of the world’s leading management consulting organizations.

Accenture plc is a multinational management consulting, technology services and outsourcing company headquartered in Dublin,Republic of Ireland. It is the world’s largest consulting firm measured by revenues[2] and is a constituent of the Fortune Global 500list.[3] As of August 2013, the company has approximately 266,000 employees serving clients in more than 120 countries.[2][4] India currently is the single largest employee base for Accenture, with the headcount expected to reach 87,000 in August 2012. In the US, it has about 40,000 employees and in the Philippines 35,000.[5] Accenture’s current clients include 89 of the Fortune Global 100 and more than three-quarters of the Fortune Global 500.[6] Since September 1, 2009 the company has been incorporated in Ireland.[7]

Accenture common equity is listed on the New York Stock Exchange and is a member of the S&P 500 index.

Accenture began as the business and technology consulting division of accounting firm Arthur Andersen. The division’s origins are in a 1953 feasibility study for General Electric. GE asked Arthur Andersen to automate payroll processing and manufacturing at GE’s Appliance Park facility near Louisville, Kentucky. Arthur Andersen recommended installation of a UNIVAC I computer and printer, which resulted in the first commercially-owned computer installation in the United States in 1954. Joe Glickauf, an early pioneer of computer consulting,[8] held a position as head of Arthur Andersen’s administrative services division for 12 years.

Accounts vary on why the split occurred – executives on both sides of the split cite greed and arrogance on the part of the other side, and executives on the Andersen Consulting side maintained breach of contract when Arthur Andersen created a second consulting group, AABC (Arthur Andersen Business Consulting) that began to compete directly with Andersen Consulting in the marketplace. Many of the AABC firms were bought out by other consulting companies in 2002, most notably, Hitachi Consulting and KPMG Consulting, which later changed its name to BearingPoint.

Andersen Consulting’s change of name proved to be fortuitous as it avoided damage to its reputation when Arthur Andersen was effectively dissolved as a result of its role in the later Enron scandal.

On January 1, 2001 Andersen Consulting adopted its current name, “Accenture”. The word “Accenture” is supposedly derived from “Accent on the future”. The name “Accenture” was submitted by Kim Petersen, a Danish employee from the company’s Oslo, Norway office, as a result of an internal competition. Accenture felt that the name should represent its will to be a global consulting leader and high performer, and also intended that the name should not be offensive in any country in which Accenture operates.[10] 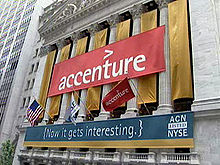 On July 19, 2001, Accenture offered initial public offering (IPO) at the price of $14.50 per share in New York Stock Exchange (NYSE);Goldman Sachs and Morgan Stanley served as its lead underwriters. Accenture stock closed the day at $15.17, with the day’s high at $15.25. On the first day of the IPO, Accenture raised nearly $1.7 billion.[11]

In October 2002, the Congressional General Accounting Office (GAO) identified Accenture as one of four publicly traded federal contractors that were incorporated in a tax haven country.[12] The other three, unlike Accenture, were incorporated in the United States before they re-incorporated in a tax haven country, thereby lowering their U.S. taxes. Critics, most notably former CNN journalist Lou Dobbs,[13] have reported Accenture’s decision to incorporate in Bermuda as a U.S. tax avoidance ploy, because they viewed Accenture as having been a U.S.-based company.[14] The GAO itself did not characterize Accenture as having been a U.S.-based company; it stated that “prior to incorporating in Bermuda, Accenture was operating as a series of related partnerships and corporations under the control of its partners through the mechanism of contracts with a Swiss coordinating entity.”

Accenture announced on May 26, 2009 that its Board of Directors unanimously approved changing the company’s place of incorporation to Ireland from Bermuda and would becomeAccenture plc.[15]

The company cited several reasons for the change:

The change became effective on September 1, 2009, the beginning of the company’s 2010 fiscal year.

While Ireland is the company’s headquarters for tax and legal purposes, much of the operational administration occurs in the United States, mainly New York City and Chicago.

The four workforces serve clients in the areas of consulting, technology, and outsourcing, as well as the company itself. This is almost always an internal designation as it is common place for Accenture employees to work in blended teams for a variety of reasons.

As most consulting firms, Accenture operates in a matrix structure. The first axis is dedicated to the operating groups, or industries of its clients. Broadly, the five Operating Groups are:

The second axis is the growth platforms, which broadly refers to the functional or technical domains in which Accenture creates and delivers solutions to clients.

Accenture advertises in television, print, and in public places, such as airports, around the world. The current advertising campaign features client success stories and the slogan, “High performance. Delivered.”

The typeface used in the Accenture wordmark is Rotis Semi-sans. The numerical “greater than” symbol over the t is intended to indicate the company’s orientation to the future and their goal of exceeding client expectations.[22]

The company was parodied in a webcomic, Bigtime Consulting, by employee James Sanchez from 1999 to 2003.

Accenture has sponsored an international event called the Accenture Match Play Championship, part of the World Golf Championships, every year since 1999.[23]

Until December 2009, Tiger Woods had been a celebrity spokesperson for the company, whose advertising used the service mark “Go on, be a Tiger” and the ancillary statement “We know what it takes to be a Tiger.” The company terminated Woods’ six-year sponsorship deal on December 13, 2009 and removed references to Woods from its website, after details of Woods’ extra-marital affairs were exposed.[24][25]

In 2013, the Ethisphere Institute designated Accenture as one of the World’s Most Ethical Companies for the 5th time.[26]

In 2013, the firm was named 9th in the Top 50 Companies for Diversity by DiversityInc. “The company has made significant strides in its talent-development efforts for people from underrepresented groups. Accenture has metrics-driven succession-planning programs and special training and education for high-potential employees, especially women.”