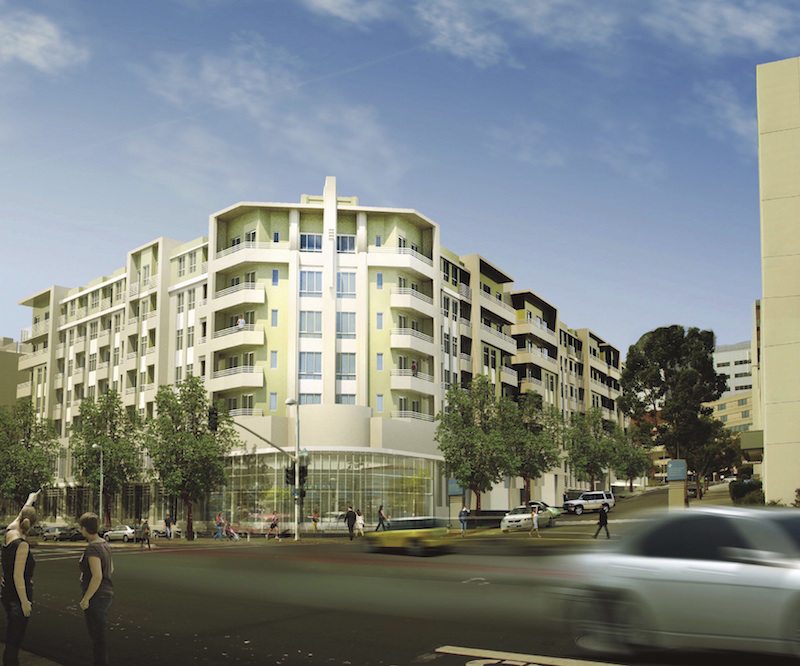 With the approval in November by the City of Oakland’s planning department, a new mixed-use project is scheduled to break ground next fall at 3093 Broadway, the current site of Auto Row’s historic Connell Building.

The project, featuring housing and retail space, is part of the city’s long-term plan to add more apartment units via three area plans—the West Oakland Specific Plan, the Broadway-Valdez District Specific Plan (where 3093 Broadway is located) and the Lake Merritt Station Area Plan. The San Francisco Bay Area is among the nation’s annual rent growth leaders and Oakland tops the area at 9.1 percent, compared to San Jose’s 9 percent and San Francisco’s 7.4 percent, according to Texas-based MPF Research, which tracks trends in the multifamily industry.

The 3093 Broadway project will sit on an approximately 3.44-acre site at the north end of the Broadway-Valdez District, just south of Interstate 580 and bounded by Broadway, Hawthorne Avenue and Webster Street, according to information from the City of Oakland. The project will demolish the majority of the existing Connell Building, now occupied by Bay City Chevrolet, which was built in 1947, but would adaptively reuse a portion of the structure by integrating the front showroom at the corner of Broadway and Hawthorne into the building. Retaining that portion of the building would cover the California Environmental Quality Act’s requirements for altering “historical resources.”

The building has a Streamline Modern design, according to the city, and is a one-story reinforced concrete structure with stucco and glass, consisting of a showroom, two-story office wing and maintenance/repair wing. The new design will incorporate the building’s facade and parapet wall, cylindrical tower and a portion of the showroom’s terrazzo flooring.

Plans call for the new seven-story building to feature up to 435 apartments, including 135 studio, 147 one-bedroom, 146 two-bedroom and seven townhouse units set above 24,000 square feet of retail space. It also will include 472 parking stalls on the first and second floors and 266 bicycle parking spaces, according to David Martin of CityView, the Los Angeles-based developer of the planned project. There also will be approximately 50 surface parking spaces for the retailers. Common open space at the top of the podium, or third floor, will include a pool and deck, outdoor food preparation area, bocce ball courtyard, artificial lawn area with seating blocks and a seating area with a fireplace. Open space on the seventh-floor deck also will include an outdoor food preparation area with seating. Approximately 30,000 square feet of private open space will be provided with patios for individual units.

The architect for the project is VTBS Architects of Santa Monica, Martin said.

According to the city, the general plan land use designation for the project site is “community commercial,” which applies to areas suitable for a wide variety of commercial and institutional uses. The site is zoned as a “mixed-use boulevard zone.”

Martin added that the current plan is to begin the working drawings in January with hopes to present them to the city for review next summer. “We would like to break ground this coming fall and expect the construction period would take 18 months to complete,” he said.

The next step, according to Peterson Vollmann, a planner III for the City of Oakland, is to file a building permit and comply “with their conditions of approval.”

Initial construction will consist of the partial demolition of the Connell Building and surface parking lot, hazardous material remediation, excavation and shoring, and foundation and below-grade construction. The city anticipates 20 to 30 workers involved in the initial stage of construction and from 200 to 250 workers at the peak stage.

A 36,000-square-foot retail development anchored by a grocery store has been approved by the city for 3001 to 3039 Broadway, the property just south of the 3093 Broadway site, and is currently under construction.