Designed by Pelli Clarke Pelli, the new Transbay Transit Center will replace the former Transbay Terminal at a cost of roughlyUSD$4.5 billion [13] and has been dubbed the “Grand Central Station of the West” by proponents.[14] The new center will eventually include an extension of Caltrain into the station from the current Caltrain Depot at 4th and King Streets in Mission Bay via tunnels which will also carry the Bay Area segment of the future California High-Speed Rail and terminate at the station. 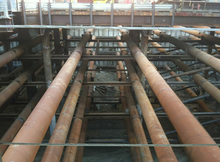 A look at the Transbay Transit Center construction site.

The Transit Center will have five levels plus a 5.4-acre (2.2 ha) public rooftop park. The lowest level will house the train platforms, and the level above it will be called the “Lower Concourse”. The next level will be the street entrance to the Transit Center. Above that will be the “Second Level”, which will have administrative offices and potential retail shops. The last transit level will service local buses from San Francisco’s Muni, the East Bay’s AC Transit, Golden Gate Transit from Marin and SamTrans from San Mateo County. Also Greyhound and Amtrak will have berths on this deck.

Come 2017, The Transbay Terminal will provide space for bus services, to be joined later by Caltrain and High Speed Rail. The Terminal will also include retail space and a public park on its roof.

The first phase of the Transbay Transit Center Program commenced in December 2008 with the groundbreaking of the Temporary Terminal; construction of the Temporary Terminal is complete and the facility has been in operation for more than three years. Demolition of the former Transbay Terminal and bus ramps commenced in August 2010 and was complete in 2011. Construction of the new Transit Center began in 2011 and is scheduled to be completed in 2017.