There is no shortage of ideas for what humans will do to Mars after semi-permanent colonies are built on the red planet. Perhaps the most radical involves changing the climate, geology, and landscape entirely into something much more Earth-like.

“We can terraform [Mars],” Kaku tells Inverse. “It’s not going to be easy, but we can induce a greenhouse effect on Mars so that Mars will have melted ice caps, rivers that flow, and perhaps even seas and oceans like it had three billion years ago.”

That’s the overall vision, but how do you actually go about turning a red, dry, freezing hellhole into something much warmer, greener, and wetter?

Hadfield emphasizes that the most limiting factor is really just the need for a robust energy source. “If you look at where we were 500 years ago with wood as the main heat generator, or coal or peat, and then look at what we take for granted, you move the thermostat on the wall and your house gets warm, and you don’t even think why or how, changing that energy source to be as compact and portable as possible — that’s the technology that’s needed,” says Hadfield. “Not just on Mars but of course here on Earth. The stepping stones that are the technology, the expectation that that’s going to happen, I think is all real.”

Ostensibly, Mars will be the first world humans have a crack at attempting to terraform. “Mercury is extremely hot, being so close to the sun,” says Kaku. “Venus is even hotter. It has a runaway greenhouse effect, so hot that lead would melt on the surface of Venus. Venus, instead of being the goddess of beauty, turned out to be a hellhole of runaway greenhouse effect.”

The red planet is really the first place humans will have the opportunity of settling (unless we decide to turn the moon into a new settlement.)

Beyond that, Kaku cites the moons of gas giants like Jupiter and Saturn as potential worlds we could attempt to terraform as well. “[Places] like Triton may sustain life or sustain colonies in the future. If you take a look at the entire solar system, you realize that there really are prospects for our future home.”

“Terraforming is a long-term process.”

Of course, easier said than done. “Terraforming is a long-term process,” says Kaku. “But if you can raise the temperature of Mars by six degrees … you have a takeoff effect. What happens is, more ice melts in the polar ice caps, which releases more water vapor, which is a greenhouse gas, which melts the ice caps even more. Then you have a runaway greenhouse effect in a positive direction, heating up Mars.” 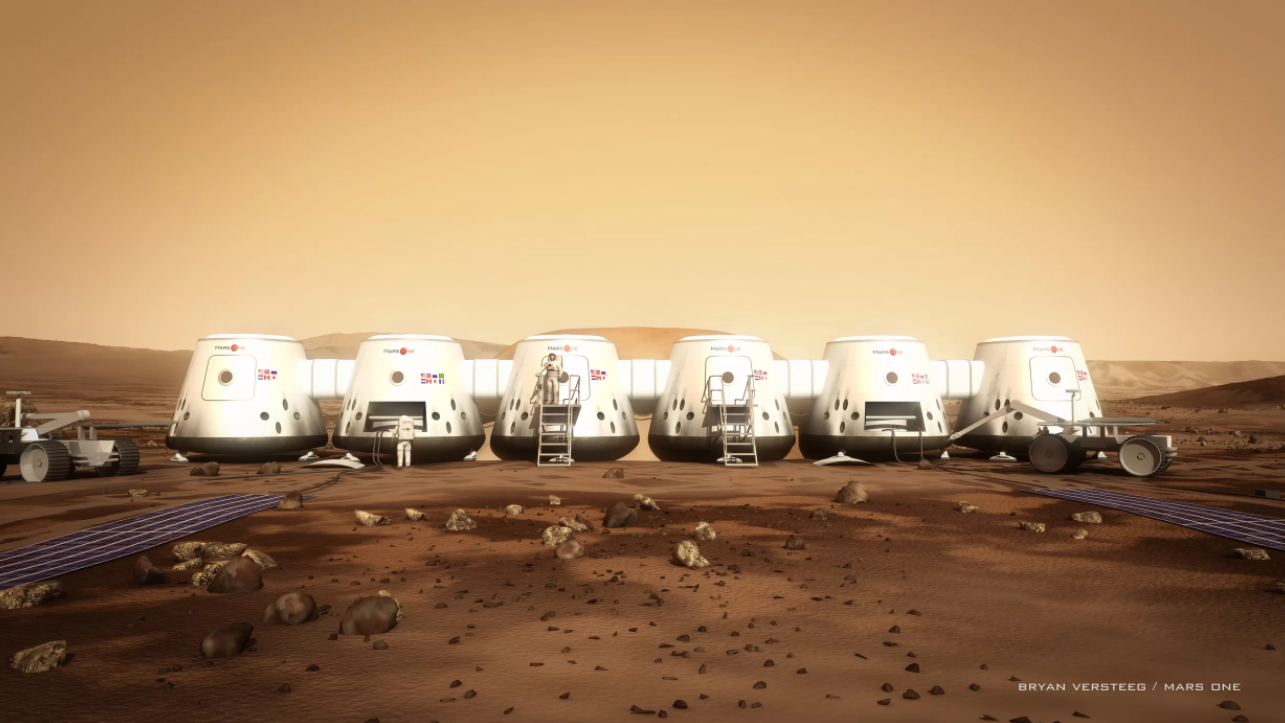 The Mars settlements proposed by Mars One
The big question, of course, is how to create that initial six-degree raise. Kaku brought up Elon Musk’s crazy idea to nuke the Martian ice caps — pitched, it should be noted, with a sense of amusement. Nevertheless, it’s a possible solution. Another, according to Kaku, is to eject methane gas into the Martian atmosphere to jumpstart the runaway greenhouse effect.

“The greenhouse effect is real,” Kaku emphasizes. “Take a look at Venus. We once thought that Venus would be tropical. Science fiction writers talked about vacationing on the oceans and tropics of Venus. Now we realize that its atmosphere is made out of almost totally carbon dioxide. It is a one-way trap for sunlight’s heat, and that’s why Venus has a temperature of 900 degrees, hotter than a baker’s oven, enough to melt tin and lead.”

One thing to emphasize about terraforming Mars — it doesn’t mean the atmosphere will suddenly be breathable for humans. “Initially, you’re just going to put, just like we do on the Space Station or [for] somebody underwater, a bubble of atmosphere around them,” says Hadfield.

As we start to better recognize how to generate free oxygen, we can start to figure out where to create bigger spaces of Earth-like atmosphere. “I’ve read that for every cubic foot on Mars, there’s a liter of water in there,” he says. “There’s an enormous resource of hydrogen and oxygen, if you can just find the energy in order to be able to release it.”

“I think we’ll start with a little bubble just for the first astronauts that get there, but then you’ll just slowly increase the size of the bubble until you can put more and more people underneath it,” Hadfield says. “It’s not that much different than trying to have a little bubble of air that’s warm enough for you, or humid enough for you, or whatever you need to sustain life.”

“Maybe eventually we can come up with enough changes you can change the whole atmosphere back to what it must have been billions of years ago, but you’ve got to start somewhere,” he says. “I think initially, you just make a small habitable zone with a mixture of oxygen and nitrogen like we have on Earth.”

Kaku, however, cautions that until that time, we definitely can’t just take our chances and attempt to enjoy the free Martian air. “Atmospheric pressure [on Mars] is only one percent [of Earth’s],” he says. “If you were to take off your space suit, you would be like Arnold Schwarzenegger in the final scene of the movie Total Recall. First of all, your blood would begin to boil. Water boils when you release the pressure on water. The boiling point starts to lower. Blood will boil, and your skin will start to expand just like in the movie. In a worst-case scenario, on the Moon, you might even explode. That’s the last thing you want to do is give up your spacesuit.”