The Michelin Guide (French: Guide Michelin [ɡid miʃ.lɛ̃]) is a series of annual guide books published by the French company Michelin for more than a dozen countries. The term normally refers to the Michelin Red Guide, the oldest and best-known European hotel and restaurant reference guide, which awards Michelin stars for excellence to a select few establishments. The acquisition or loss of a star can have dramatic effects on the success of a restaurant. Michelin also publishes a series of general guides to countries.

Michelin is synonymous with quality across a variety of sectors including guides, professional and sports footwear, tires and safety products. But few know about the humble origins of Michelin, dating back to more than 110 years ago.

From the days of mapping war-torn France to the present, in which Michelin tread outfits both Ultra High Performance sport vehicles and Babolat tennis shoes, the company has progressed from two brothers repairing a bike to a nearly $15 billion dollar company. And though travel has changed in the last century, Michelin’s approach of offering the best tools to enhance travel has remained the same.

A Brief History of MICHELIN The Michelin Man is Born: At the Universal and Colonial Exhibition in Lyon in 1894, the entrance to the Michelin stand is decorated with two columns of tires piled high, prompting Édouard Michelin to remark: “Give it some arms and legs and it would look like a man!” Soon afterward, André Michelin conceives a character based on a sketch by the illustrator O’Galop. His motto is “Nunc est Bibendum,” a Latin verse from the poet Horace which means “It’s time to drink!” A clever association between this cartoon character and the piles of tires gives rise to the creation of the Michelin Man, and the translation of the slogan becomes “Michelin tires drink obstacles!”

The first MICHELIN Red Guide is published; 35,000 copies are printed with the prophetic words of André Michelin: “This guide was born with the century, and will last as long as the century does.”
André and Edouard Michelin foresaw that for the automobile to be successful, motorists had to be able to find places to refuel, charge their batteries or change their tires wherever they traveled. The MICHELIN guide was therefore created to offer drivers all of this useful information, free of charge. The MICHELIN Travel Department, “Bureau d’Itinéraires,” provides free information on the best roads to take, distances, and service stations in all countries.

The Michelin Green Guides review and rate attractions other than restaurants. There is a Green Guide for France as a whole, and a more detailed one for each of ten regions within France. Other Green Guides cover many countries, regions, and cities outside France. Many Green Guides are published in several languages. They include background information and an alphabetical section describing points of interest. Like the Red Guides, they use a three-star system for recommending sights ranging from “worth a trip” to “worth a detour”, and “interesting”. Michelin develops a computerized system that allows travelers to create road maps with detailed instructions. This system is available on the French Minitel.

The Bib Gourmand distinction is first introduced in France.

The Michelin Man celebrates his 100th Birthday. His centenary is an opportunity for the company to give him a new look: he appears slimmer and more dynamic in the company’s brand block.

The Michelin Man is chosen as the world’s best logo of the century by an international panel of professionals at the Financial Times.

Michelin Lifestyle launches to develop new product ranges both in mobility-related leisure sectors and in the Michelin Man universe.

Descriptions of the establishments are added to the Red Guides.

Michelin launches the first US guide, Red Guide New York City. It features 500 restaurants (39 of which are star-rated) and 50 hotels, and is a popular success: more than 100,000 copies are sold in a hundred or so countries.

The 100th Edition of the Red Guide France is published.
The first iPhone app is launched.

MichelinTravel.com is given a face-lift and re-launched at the end of September 2011, to coincide with the latest release of the New York City Bib Gourmand list. 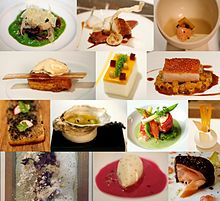 Dishes made by Michelin star restaurants

Red Guides have historically listed many more restaurants than rival guides have done, relying on an extensive system of symbols to describe each establishment in as little as two lines. Reviews of starred restaurants also include two to three culinary specialities. Recently short summaries (2–3 lines) have been added to enhance descriptions of many establishments. These summaries are written in the language of the country for which the guide is published (though the Spain and Portugal volume is in Spanish only) but the symbols are the same throughout all editions.

Michelin reviewers (commonly called “inspectors”) are completely anonymous; they do not identify themselves, and their meals and expenses are paid for by the company founded by the Michelin brothers, never by a restaurant being reviewed. In 2009 The New Yorker said:

Michelin has gone to extraordinary lengths to maintain the anonymity of its inspectors. Many of the company’s top executives have never met an inspector; inspectors themselves are advised not to disclose their line of work, even to their parents (who might be tempted to boast about it); and, in all the years that it has been putting out the guide, Michelin has refused to allow its inspectors to speak to journalists. The inspectors write reports that are distilled, in annual “stars meetings” at the guide’s various national offices, into the ranking of three stars, two stars, or one star—or no stars. (Establishments that Michelin deems unworthy of a visit are not included in the guide.)

The French chef Paul Bocuse, one of the pioneers of nouvelle cuisine in the 1960s, said, “Michelin is the only guide that counts.” In France, each year, at the time the guide is published, it sparks a media frenzy which has been compared to that for annual Academy Awards for films. Media and others debate likely winners, speculation is rife, and TV and newspapers discuss which restaurant might lose, and who might gain, a Michelin star.

The Michelin Guide also awards Rising Stars, an indication that a restaurant has the potential to qualify for a star, or an additional star

A menu course from a Michelin rated restaurant in Helsinki, Finland

A course in a Michelin starred restaurant in Geneva, Switzerland

A course in a Michelin starred restaurant in Tokyo, Japan

Since 1955 the guide has also highlighted restaurants offering “good food at moderate prices”, a feature now called “Bib Gourmand”. They must offer menu items priced below a maximum determined by local economic standards. Bib (Bibendum) is the company’s nickname for the Michelin Man, its corporate logo for over a century.

All listed restaurants, regardless of their star- or Bib Gourmand-status, also receive a “fork and spoon” designation, as a subjective reflection of the overall comfort and quality of the restaurant.  Rankings range from one to five: One fork and spoon represents a “comfortable restaurant” and five signifies a “luxurious restaurant”. Forks and spoons coloured red designate a restaurant that is considered “pleasant” as well.

Restaurants, independently of their other ratings in the guide, can also receive a number of other symbols next to their listing. Michelin Travel publishes more than 22 million maps and guides annually and sells them in 70 countries worldwide:

At the turn of the 20th century Michelin created the MICHELIN Guide, its first travel publication in an effort to encourage motorists to travel in the recently introduced automobile. Since then, hundreds of other travel guides have been developed to cultivate and satisfy the human spirit’s pursuit of adventure.

If you are traveling around the corner or around the world, Michelin maps, guides and atlases are designed to enhance your visit and help you:

No other company in the world understands mobility the way Michelin does. Our entire mission focuses on improving mobility for customers. Whether you use our tires or our travel products, you can rest assured that Michelin helps your journey go smoothly.