Russian Hill is a neighborhood of San Francisco, California, in the United States. It is named after one of San Francisco’s 44 hills, and one of its original “Seven Hills”. Russian Hill is directly to the north (and slightly downhill) from Nob Hill, to the south (uphill) from Fisherman’s Wharf, and to the west of the North Beach neighborhood. The Hill is bordered on its west side by parts of the neighborhoods of Cow Hollow and the Marina District.

At the northern foot of the hill is Ghirardelli Square, which sits on the waterfront of the San Francisco Bay, Aquatic Park, and Fisherman’s Wharf, an extremely popular tourist area. A trip down the winding turns of Lombard Street and across Columbus Avenue to the east leads to the neighborhood of North Beach. Down the hill to the west, past Van Ness Avenue, are Cow Hollow and the Marina districts. Russian Hill, a residential neighborhood with pockets of restaurants and shops, feels a bit more visitor-friendly than its more formal neighbor, Nob Hill. The views are also just as dazzling. 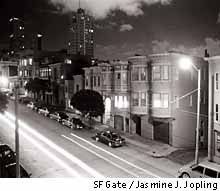 The neighborhood got its name when gold rushers found seven Cyrillic-inscribed gravestones at the top of the hill. Consensus on the identity of the Russian men buried there — they were reputed to be anything from sailors to fur trappers — was never reached, the gravestones disappeared in the late 1800s and the Russian influence has long since dissipated.

Charming restaurants and small businesses cluster on leafy Hyde Street between Jackson and Union Streets, and Polk Street is crowded with unusual boutiques, antique shops, trendy restaurants and night spots. A mini French quarter has sprung up around Polk and Green, where you’ll find a great bistro, a traditional café-boulangerie, a French antiques store, and several French-influenced gift and home décor shops.

The center of Russian Hill is accessible by the Hyde-Powell cable car and two Muni buses, the 41 (weekday rush hour only) and the 45. The 19 runs along Polk Street, stopping frequently from Ghirardelli Square to the Tenderloin.

Lombard Street: Known as “the world’s crookedest street,” Lombard winds past ornate houses (one of which was home to the San Francisco edition of “The Real World”) and lush, flowering bushes. Between Hyde and Leavenworth streets.

Parks, Gardens and Great Views: Although the bursting hydrangeas along Lombard Street are pretty, there are more leisurely places to enjoy the outdoors. Alice Marble Park, at the corner of Greenwich and Larkin streets, is a block away and offers a stunning view of the neighborhood’s historical houses. Ina Coolbrith Park (at the intersection of Taylor and Vallejo streets) has steep steps lined with thick trees and a patch of grass where locals sunbathe (fog permitting) and read. With its sweeping views of the Bay, North Beach, the Bay Bridge and the lower Financial District, it’s also a favorite, lesser-known spot to watch fireworks. Adjacent to the park are the Vallejo Ramps — steep, zigzagging steps — between Jones and Taylor streets. From there (or anywhere at the top of the hill), the view of the Bay and Alcatraz is stunning. Over at Macondray Lane (known to Armistead Maupin fans as Barbary Lane), get a behind-the-scenes look at life in the neighborhood as you go from busy Union Street to hidden urban gardens.

San Francisco Art Institute: The architects behind San Francisco’s City Hall designed this Spanish-style structure, complete with bell tower, in the 1920s. Stop in to view the school’s imposing and magnificent Diego Rivera mural, or to take in a student exhibit or artist lecture. The school café is open to the public and offers comforting staples like peanut butter and jelly sandwiches, burgers and just-baked cookies, accompanied by a splendid view of the Bay. 800 Chestnut St., (415) 771-7020.