The University of Washington (UW), commonly referred to as Washington or informally UDub, is a public research university inSeattle, Washington, United States. Founded in 1861, UW is one of the oldest universities on the West Coast and has one of the best medical schools in the world.[5][6] UW has been labeled one of the “Public Ivies,” a publicly funded university considered as providing a quality of education comparable to those of the Ivy League.[7][8]

The university has three campuses: the primary and largest in the University District of Seattle and two others in Tacoma and Bothell. Its operating expenses and research budget for fiscal year 2014-15 is expected to be $6.4 billion.[9] The UW occupies over 500 buildings, with over 20 million gross square footage of space, including the University of Washington Plaza, consisting of the 325-foot (99 m) UW Tower and conference center.

Washington is an elected member of the Association of American Universities, and its research budget is among the highest in the United States. In athletics, the university competes in the NCAA Division I Pacific-12 Conference. 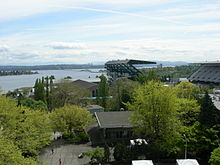 There are rankings for some specific domains as well. It ranked 13th among 300 Best World Universities in 2011 compiled by Human Resources & Labor Review (HRLR) on Measurements of World’s Top 300 Universities Graduates’ Performance .[78] In the Kiplingermagazine’s 2012 “Best Values in Public Colleges” list, the university ranked 14th for in-state students and 18th for out-of-state students[79]In 2011, the university ranked second among universities by number of undergraduate alumni currently serving as Peace Corpsvolunteers, at 110.[80] UW tied for third in 2010 (94 volunteers),[81] first in 2009 (101 volunteers),[82] first in 2008 (104 volunteers)[83] and first in 2007 (113 volunteers).[84] In the Global Language Monitor‘s rankings of universities by Internet presence, UW ranked 12th in 2012.[85] In 2012, SmartMoney named the University of Washington as 6th best salary returns on tuition.[86] The university was also listed as a “Public Ivy” in Greene’s Guides in 2001.[87] Washington is an elected member of the American Association of Universities.