The first public institution of higher education in North Carolina, the school opened its doors to students on February 12, 1795. The university offers degrees in over 70 courses of study through fourteen colleges and the College of Arts and Sciences. All undergraduates receive a liberal arts education and have the option to pursue a major within the professional schools of the university or within the College of Arts and Sciences from the time they obtain junior status. Under the leadership of President Kemp Plummer Battle, in 1877 North Carolina became coeducational and began the process of desegregation in 1951 when African-American graduate students were admitted under Chancellor Robert Burton House.[15][16] In 1952, North Carolina opened its own hospital, UNC Health Care, for research and treatment, and has since specialized in cancer care. The school’s students, alumni, and sports teams are known as “Tar Heels“.

The campus of North Carolina is located in Chapel Hill, North Carolina, a university town. The campus covers a rather small 729 acres (3 km2) over Chapel Hill’s downtown area, encompassing places like the Morehead Planetarium and the many stores and shops located on Franklin Street. Students can participate in over 550 officially recognized student organizations. The student-run newspaper The Daily Tar Heel has won national awards for collegiate media, while the student radio station WXYC provided the world’s first internet radio broadcast. North Carolina is one of the charter members of the Atlantic Coast Conference, which was founded on June 14, 1953. Competing athletically as the Tar Heels, North Carolina has achieved great success in sports, most notably in men’s basketball and women’s soccer.

The university was named a Public Ivy by Richard Moll in his 1985 book The Public Ivies: A Guide to America’s Best Public Undergraduate Colleges and Universities, and in later guides by Howard and Matthew Greene.[98][99] Many of UNC’s professional schools have achieved high rankings in publications such as Forbes Magazine, as well as annual U.S. News & World Reportsurveys.[100][101] In 2009, U.S. News & World Report ranked UNC business school’s MBA program as the 20th best in the United States. In the 2011 edition, U.S. News & World Report ranked the UNC Gillings School of Global Public Health as the top publicschool of public health in the United States, and the second ranked school of public health in the nation (behind the top ranked school, Johns Hopkins and ahead of the third ranked school, Harvard).[102][103] The UNC Eshelman School of Pharmacy was ranked second among pharmacy schools in the United States in 2012 by the U.S. News & World Report.[104] In 2005, Business Week ranked UNC business school’s Executive MBA program as the 5th best in the United States.[105] Other highly ranked schools include journalism and mass communication, law, library and information science, medicine, dentistry, and city and regional planning.[103][106][107][108][109] Nationally, UNC is in the top ten public universities for research.[110] Internationally, the 2012 QS World University Rankings[111] ranked North Carolina 57th overall in the world, moving up 21 places from its position of 78th in the 2009 THE-QS World University Rankings (in 2010 Times Higher Education World University Rankings and QS World University Rankings parted ways to produce separate rankings). 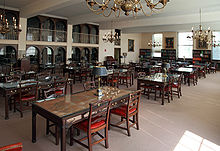 The NCC is the largest collection of printed materials related to a single state.[112]

UNC’s undergraduate program is ranked 30th in the United States by the U.S. News & World Report and is consistently ranked among the nation’s top five public universities, just behind UC Berkeley, University of Virginia, UCLA, and the University of Michigan.[113][114]Kiplinger’s Personal Finance has also ranked UNC as the number one “best value” public college for in-state students.[115] The university also topped The Princeton Review‘s list of the Best Value Colleges in 2014.[116] Similarly, the university is first among public universities and ninth overall in “Great Schools, Great Prices”, on the basis of academic quality, net cost of attendance and average student debt.[117]Along with one of the nation’s most acclaimed undergraduate honors programs in a public institution, UNC also has the highest percentage of undergraduates studying abroad for any public institution.[65][118]

In 2012, a case of academic fraud was found in the Afro-American Studies Department when an investigation, led by former governorJames G. Martin, found that many courses were entirely pro-forma. Former Afro-American Studies Department chairman Julius Nyang’oro had little oversight in creation of these courses that either met a few times during the year, or at all.[119] Students in these courses were able to get a passing grade for submitting term papers without attending classes. 216 classes were found to have problems, and 106 student grades were changed without authorization. No anomalies were found outside of the Department of African and Afro-American Studies.[120] The fault for these irregularities was laid entirely on Julius Nyang’oro and former administrator Deborah Crowder. No other members of the department were found responsible for any misconduct.