Vanderbilt University, colloquially known as Vandy, is a private research university located in Nashville, Tennessee, United States. Founded in 1873, the university is named in honor of shipping and rail magnate “Commodore” Cornelius Vanderbilt, who provided the school its initial $1 million endowment despite having never been to the South. The Commodore hoped that his gift and the greater work of the university would help to heal the sectional wounds inflicted by the Civil War.[2]

Today Vanderbilt enrolls approximately 12,000 students from all 50 U.S. states and over 90 foreign countries in four undergraduateand six graduate and professional schools. Several research centers and institutes are affiliated with the university, including the Vanderbilt Institute for Public Policy Studies, Freedom Forum First Amendment Center, Dyer Observatory, and Vanderbilt University Medical Center, the only Level I trauma center in Middle Tennessee. With the exception of the off-campus observatory and satellite medical clinics, all of university’s facilities are situated on its 330-acre (1.3 km2) campus in the heart of Nashville, only 1.5 miles (2.4 km) from downtown. Despite its urban surroundings, the campus itself is a national arboretum and features over 300 different species of trees and shrubs. 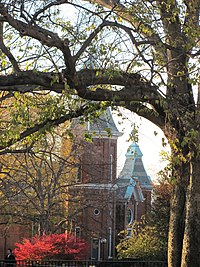 The Academic Ranking of World Universities ranks Vanderbilt as the 49th-best university in the world.[55] Additionally the ARWU Field rankings in 2013 placed Vanderbilt Medical Center as the 21st best place in the world for Clinical Medicine and Pharmacy,[56] 31st in Life and Agricultural Sciences,[57] and 21st in Social Sciences.[58] The School of Engineering and the College of Mathematics and Natural Sciences also rank as one of the top in the world.[59][60] In the Times Higher Education 2013, Vanderbilt is ranked 31st in North America and 88th worldwide.[61] The 2013 QS World University Rankings ranked Vanderbilt university 181st in the world.[62] Human Resources & Labor Review, a national human competitiveness index & analysis, ranked the university as one of 50 Best World Universities in 2011.[63] The 2007 Faculty Scholarly Productivity Index, a measure of the scholarly output of the faculty of nearly 7,300 doctoral programs around the United States, ranked Vanderbilt 8th among large research universities, and 1st in the areas of comparative literature, educational leadership, pharmacology, Portuguese, Spanish, and special education.[64] Poets & Writersranked Vanderbilt’s English Department’s MFA Program in Creative Writing 18th among the top 50 writing programs in the United States in 2010 and 14th in the United States in 2011.[65] Fortune magazine ranked Vanderbilt among the top 100 places to work in the United States, the only university on their list.