As the City of Oakland works to shift the Broadway Valdez district into a destination for retail and mixed-used development, The Hanover Company is proposing to add a seven-story residential-and-retail project featuring about 255 housing units to the neighborhood.

The city’s Planning Commission on Jan. 20 will discuss and review the design of the Houston, Texas-based developer’s plan to redevelop a parcel at Broadway and 27th Street to make way for a building containing rental apartments and more than 37,000 square feet of retail space. Also included would be 2.5 levels of below-grade parking with about 300 spaces.

TCA Architects worked on the project, which would feature a contemporary design and contain studio, one- and two-bedroom units and amenities such as a clubhouse, fitness room, garden, roof deck and bicycle storage, according to the project’s California Environmental Quality Act report.

Hanover was drawn to the site due to its strong location and “the positive attributes of the district that make it an attractive place where you can live, work, shop and eat all within a five-, 10-minute walk,” Youdall said. The company also is working on plans for another mixed-use project in the neighborhood, he said, but he declined to discuss details at this time.

Oakland seeks “more pedestrian-oriented retail” in the Broadway Valdez district, said Peterson Vollman, a senior planner for the city, which adopted a specific plan for the area in 2014. The district, centered around the Broadway Auto Row area featuring many car dealerships and surface parking lots, sits just north of downtown Oakland and adjacent to Lake Merritt. The city wants “big footprint ground-floor retail,” especially in the area where Hanover’s proposed project is located, he said. The specific plan includes land use strategies for adding retail and mixed-use development on Broadway between 23rd Street and Interstate 580.

“Broadway Valdez was always a low-density area and over time buildings were [demolished] for parking lots,” said Rachel Flynn, director of Oakland’s Planning and Building Department. The city “realized there’s an opportunity to do good infill [development] and really focus on retail as well because you could get some critical mass” in the area.

Hanover’s project would sit on 1.1 acres currently occupied by a surface parking lot and an auto service. It also carries the former 1960s-era Biff’s Coffee Shop, which is designated a historic resource under CEQA. Some residents have expressed concerns about demolishing the coffee shop, which closed in 1996, but city planners said the property is not in top shape. “It has been neglected so long,” Flynn said.

There are now close to 2,000 residential units proposed for the Broadway Valdez district, Vollman said. Among those projects are developer Wood Partners’ plan to add about 200 units at 2302 Valdez, and Thompson Dorfman’s plan for a mixed-use project with about 240 residential units at 2315 Valdez-2330 Webster Street. Also, a new Sprouts grocery will open this month at Broadway and 30th Street, Vollman said.

City planners see the district becoming a new vibrant neighborhood that is well-situated three blocks from a BART station and with easy access to the Alameda-Contra Costa (AC) Transit bus route and I-580. “It’s all coming together,” Flynn said.

Once approved by the city, Hanover could begin construction on its project this year, with completion expected in 2018, Youdall said. 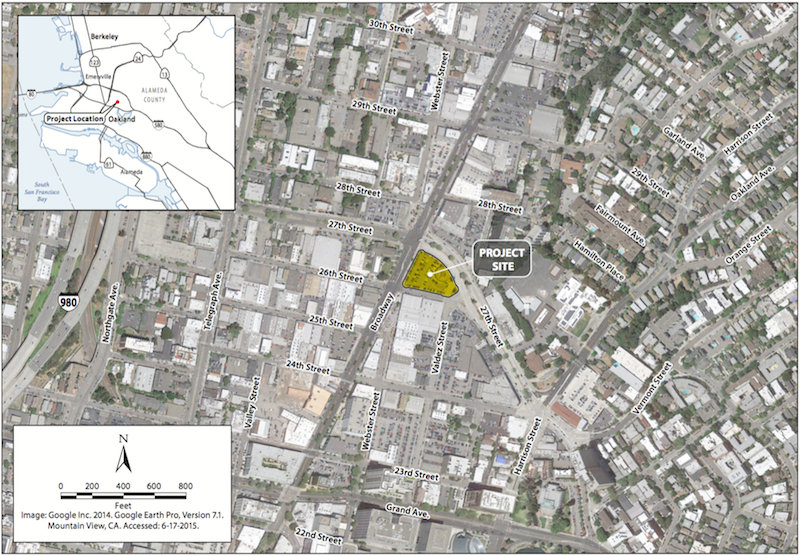