The City Council approved a pair of four-story apartment complexes on Tuesday that will add 362 homes to the city’s booming real estate market.

For the Prometheus project, Jac Siegel cast the only dissenting vote after expressing concern with the project’s use of 108 parking “stackers” in an underground garage more common in places like New York, but a first for Mountain View. The car lifts allow one car to park underneath another; without them, the project would be 21 spaces short of city requirements. Siegel said he saw the lifts in Barcelona, Spain, and “people hated them. I think it’s going to be a mistake.”

“If this project had stackers and parking were available in the street, I would be opposed,” said council member John McAlister, who often sides with those who worry about parking overflow in their neighborhoods. “It’s their money; buyer beware.”

Both projects will compensate residents for using public transportation, a practice that the council will ultimately adopt a standard for in a precise plan for El Camino Real, said planning director Randy Tsuda. There is still some question as to what is the best way to do that, however, and the council ended up approving a different method for each project in what Tsuda called an ” experiment.”

The council required that data be collected to evaluate the different approaches. Summerhill will provide “Eco-Passes” that the Valley Transportation Authority provides at a dramatic discount for three years, and an optional $25 a month rent credit to residents after that. Prometheus was required to provide a similar subsidy right off the bat.

As the council discussed options for the Prometheus project, council member Margaret Abe-Koga noted how much of a discount Eco-Passes can provide for groups large enough to receive the discount. According to the VTA website, the cost is $3,600 a year to provide Eco-Passes to every employee at a 100-person company. That cost of $36 each represents a savings of $95,400 from the cost of individually purchased passes. But the passes are limited to VTA light rail and buses; Caltrain is excluded.

“If I were a resident I’d be a little perturbed that you’d be forcing me to use bus or light rail” said council member Chris Clark, who noted the popularity of Caltrain. Others suggested the use of Clipper cards and reimbursing residents for what was actually spent on transit.

The Environmental Planning Commission recommended that Prometheus be required to provide Eco-passes to residents for the life of the project, which Prometheus opposed. That led city staff members to recommend that the council not approve the Prometheus project ahead of a precise plan for El Camino Real, “due to the applicant’s opposition to the (Environmental Planning Commission) requirements regarding ongoing transit subsidies and the lack of a mobility-related community benefit offering,” a report to the council said.

Jon Moss of Prometheus argued that other benefits — including $1.4 million for below-market-rate housing versus Summerhill’s $1.3 million — made up for his company’s smaller transportation subsidy.

Council members removed the possibility of an easement for a trail to Latham Street along the back of the Prometheus project, which neighbors in a town home complex said would run through their backyards. Council member Ronit Bryant clarified that it would be built only if homeowners there decided to redevelop their properties or sell them one day.

Both projects include 150 bike-storage spaces required by city code and a car-sharing program. Prometheus plans to include electric car-charging stations as well. Garages provide parking under each project: 249 spaces for Prometheus and 228 for Summerhill.

If environmental friendliness were a contest, the Summerhill project would win, with 135 points on the “Greenpoint checklist” of sustainable building features. The Prometheus project had 118 points.

Park space for both projects could be put on adjacent properties that could be sold to the city in the future. At Summerhill, a used car lot on the corner of the site could potentially be sold to the city for a park, while a piece of the former Austin’s BBQ property next to the Prometheus project — also the site of the project’s second phase — could be sold by Prometheus for a city park. Both projects provide around 190 square feet of common open areas.

Prometheus will pay the city $3.7 million in fees to go towards park space, while Summerhill will pay $3.4 million. 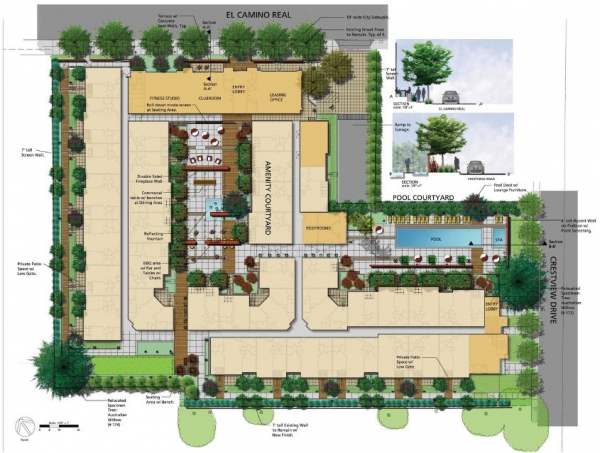